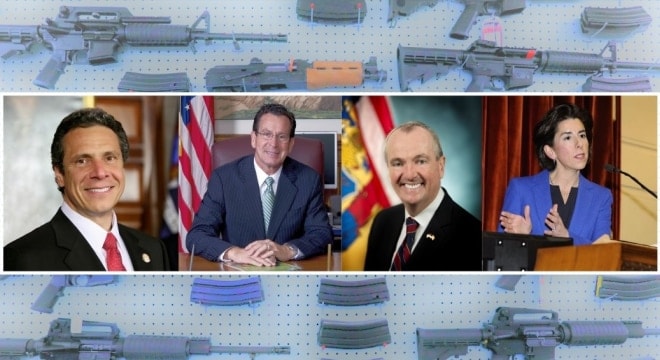 A quartet of Democratic governors known for favoring increased regulations on firearms formed “States for Gun Safety” this week with an aim towards cooperating on gun control efforts.

Govs. Andrew Cuomo of New York, Dannel Malloy of Connecticut, Phil Murphy of New Jersey, and Gina Raimondo of Rhode Island announced on Thursday they had entered into a memo of understanding “in the face of repeated federal inaction” to take on the subject of gun control with a regional approach.

Among the aims of the coalition is to establish a multi-state background check database, trace and intercept guns across state lines, and contribute to combined research into an “epidemic” of gun violence as a public health concern.

“Gun violence is not a New Jersey problem, or a New York problem, or a problem for any particular state or region – it is a national problem,” Murphy said in a joint statement. “However, we cannot wait for Congress to act. As states, we must work together to take the steps and enact the measures to protect our residents and our communities. But, even more importantly, a collective of states can take these steps together broaden the reach and impact of commonsense gun safety laws.”

The three-page memo outlines plans to create a multi-state task force that would share intelligence to trace and intercept illegal guns. In addition, the states plan to share information about individuals to “determine the fitness and suitability” of gun applicants or owners. Another aspect of the coalition would be to explore granting reciprocal law enforcement powers to investigators pursuing threats. Finally, the group intends to establish the nation’s first “Regional Gun Violence Research Consortium” with an aim to fill a perceived lack of federal research on gun accidents, suicide and crime as a public health and welfare issue.

Each of the four governors has solid anti-gun track records. Cuomo and Malloy both signed and stood by controversial sweeping expansions of their respective state’s laws on “assault weapons” in 2013 that included banning larger pools of guns and accessories. Raimondo has signed legislation to expand mandatory firearms seizures in domestic violence cases and supports an assault weapon ban for her state while Murphy, only recently elected, came to office with a multi-pronged agenda of gun bills on his plate.