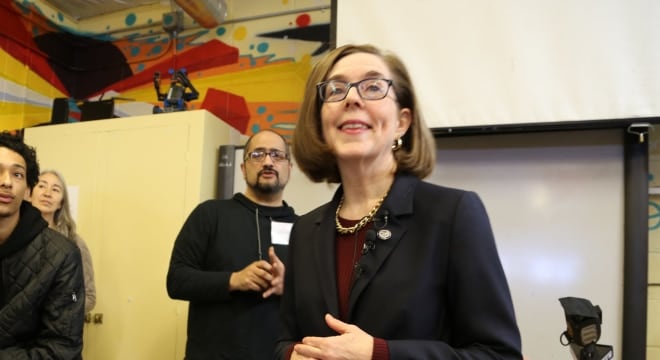 A House measure characterized by Gov. Kate Brown as closing the “Intimate Partner Loophole” passed the Senate Thursday on a party-line vote.

The bill, HB 4145, would expand Oregon’s current definition of a domestic abuser. Brown’s measure would update the definition to include those not married and add persons convicted of misdemeanor stalking to those barred from possessing firearms. The measure passed without a single Republican vote in the Senate and heads to Brown for signature.

“Closing the ‘Intimate Partner Loophole’ is an important step to keep Oregonians safer, and to keep guns out of the wrong hands,” said Brown, who testified before lawmakers on the proposal twice this month. “Passing this bill was a priority for me this session, but we know there’s more that must be done.”

The legislation, a project of the Governor’s for the past several years, would prohibit dating partners under protective orders in a domestic abuse situation from having guns. The move would also void the Second Amendment rights of those with stalking convictions and require the state to inform local law enforcement when a prohibited firearms possessor attempted to buy a gun.

Gun control advocates to include Everytown and Giffords applauded Brown and the lawmakers in Salem for passing a fix for “glaring loopholes in Oregon law.”

Second Amendment groups in the state, who characterize the measure as a gun confiscation bill that treads on constitutional law, said the measure is filled with pitfalls.

“This law unlike all other states in the U.S., would allow anyone, without specification, to make specious accusations against you, without proof,” Paul Watson, of the Firearms Policy Coalition, told lawmakers during testimony this week.

Watson also pointed out that penalties for false accusations under HB 4145, as in other domestic abuse statutes in Oregon, are negligible and rarely pursued by prosecutors. For example, in one high-profile case, a Bend man was cleared last month of a series of allegations made by a former girlfriend who was in turn not prosecuted by officials out of fear it would have “a chilling effect on survivors of domestic violence and sexual assault.”

For her part, Brown characterized HB 4145 as only a start in a push to more gun control.

Closing the Intimate Partner Loophole was my top priority this session, and I look forward to signing #HB4145 into law. But more must be done, and we need Congress to pass meaningful gun legislation to keep our communities safer.