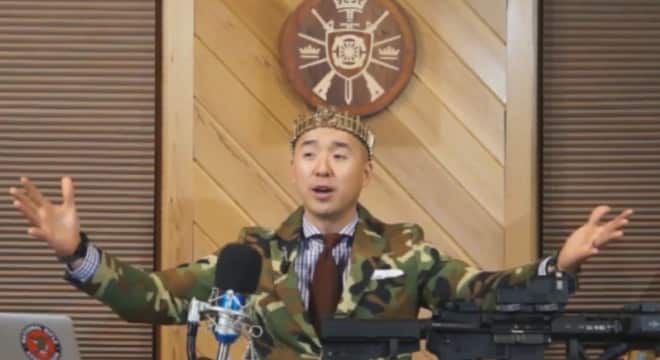 Rev. Sean Moon, of Rod of Iron Ministries and the World Peace and Unification Sanctuary Church, is planning a blessing event this week in which AR-15s play a part. (Photo: Rod of Iron)

A small church in the Poconos plans to hold a blessing ceremony this week in which couples are urged to bring a “rod of iron” defined as an AR-15 or similar.

The World Peace and Unification Sanctuary Church in Newfoundland planned its event months ago and, contrary to some media reports, the couples attending will be blessed and not the firearms they bring. Church leaders say the blessing, in which 600 are expected to participate Wednesday, is a historic first for the church.

“This will be a big thing for us,” said Tim Elder with the Sanctuary Church. “It’s a new stage for us because it incorporates the rod of iron, as it is in [The Book of] Revelations. Revelations talks about the returning Christ ruling with the rod of iron.”

An offshoot of late Korean religious figure Sun Myung Moon’s Unification Church, the Sanctuary Church is led by his son, Sean Moon, who teaches the AR-15 is a tangible symbol of the church that shows “both the intent and the ability” to defend ones’ family, community, and nation. Those couples who attend the blessing ceremony, are expected to either bring an AR-15 or similar– AKs are fine– or a $700 gift certificate from a gun store to show the intent to acquire such a semi-auto.

The church has a history of strong support for the right to keep and bear arms. Kahr Arms founder and owner Justin Moon is Rev. Moon’s brother and the pair helped organize a dinner to benefit a national gun rights group last week. Further, the church has sponsored “rod of iron” art contests in which participants completed works that had to include a firearm.

Although some in the community are concerned the event will be held close to a school, and gun control advocates plan to protest, church organizers point out that the guns at the ceremony will be unloaded and zip-tied.