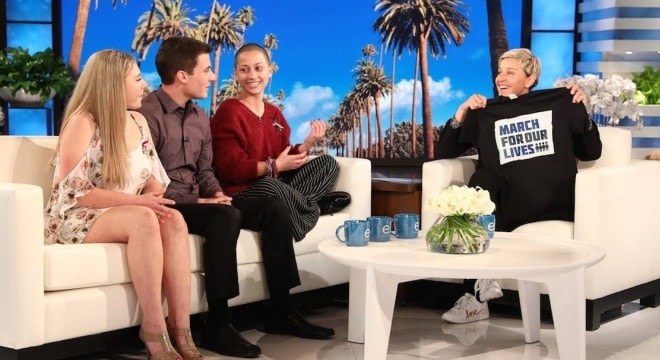 The students associated with the March for Our Lives organization have become a fixture on television in recent days. (Photo: Screengrab of Ellen Show)

The March for Our Lives group, founded two weeks ago, already counts a number of high-profile celebrity donors and a large war chest for gun control efforts.

Founded by Marjory Stoneman Douglas High School student Cameron Kasky, 17, days after a shooting that killed over a dozen at his Parkland, Florida school, crowd-funding for the effort hit $2.6 million in just seven days from 32,000 contributors. This does not include millions more in pledges from Hollywood celebrities George and Amal Clooney, Oprah Winfrey, Jeffrey and Marilyn Katzenberg, and Steven Spielberg and his wife, Kate Capshaw, who each promised the campaign $500,000. Gucci chipped in another half-million.

The group has launched a slick website, registered just three days after the shooting, began selling merchandise, and expanded to social media. Stoneman Douglas student Emma González, well-known for her 11-minute speech at a Ft. Lauderdale gun control rally, managed to pick up 928,000 followers on Twitter this month.

“The mission and focus of March For Our Lives is to demand that a comprehensive and effective bill be immediately brought before Congress to address these gun issues,” says the group, railing against “assault rifles.”

The organization has been feted by the media and is making the rounds among the talk show circuits, with Kasky contributing an op-ed to CNN and the students visiting with Ellen. Meanwhile, legacy gun control groups Everytown and Moms Demand Action have announced they are forming a student-based group and are supporting the planned March for Our Lives protest in Washington set for next month.

What happens the day after the march? Billionaire environmentalist Tom Steyer, a traditional super-donor for Democrats, is pledging $1 million in an effort to coordinate with Everytown and Giffords to register high school students to vote in 10 key battleground states, just in time for the 2018 mid-term elections.

“Come November, many of those young Americans will be making the difference themselves as they cast their votes for the first time,” Giffords said.

But until the Fall, it remains to be seen if the students-turned-activists will have an effect at the polls. Past opinion surveys have found that Millennials statistically aren’t that much more liberal from the rest of the country in their feelings on gun control while one recent poll found Americans overall tend to blame mass shootings on mental health rather than gun laws in a two-to-one margin.