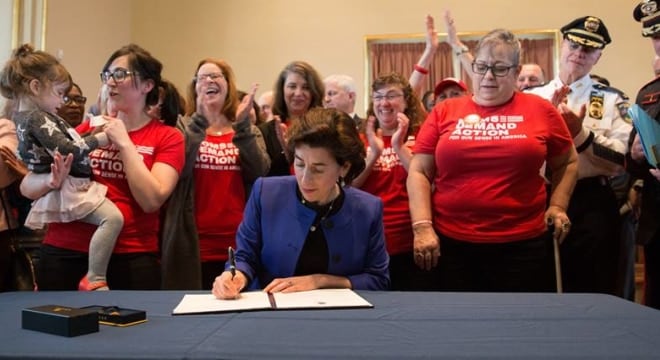 Gov. Gina Raimondo, among a crowd of gun control advocates, signed an executive order this week focusing on removing guns from some in so-called “red flag” cases. (Photo: Governor’s office)

Rhode Island’s Democrat Gov. Gina Raimondo signed an executive order Monday directing authorities in the state to use all legal steps to remove firearms from the home of those they feel are a danger.

Raimondo’s action, signed before a crowd of gun control advocates, comes in tandem with a measure introduced in the state legislature to enact so-called extreme risk protective orders which would allow police to take guns from those a judge feels may be a threat to themselves or others. While the bill progresses to her desk, Raimondo said her executive action will help pave the way.

“We cannot wait a minute longer for Washington to take action to prevent gun violence,” Raimondo said. “The executive order I signed today is an immediate step we can take to make residents safer. It sets the table for a complementary legislative effort.”

The order directs state police to take steps consistent with “all applicable state and federal laws and regulations” to remove guns from the household of those that investigators believe pose a significant danger to themselves or others in a “red flag” report. The investigation would follow up on tips received about recent threats of violence such as posts or statements made on social media coupled with, say, evidence of access to firearms. State police, working with local law enforcement as a part of Raimondo’s order, would follow-up with the person reported by a tipster and conduct background checks and information searches before acting.

The executive order is the precursor to the ERPO bill filed by House Speaker Nicholas Mattiello (D) with the support of the Rhode Island Police Chiefs’ Association. Under Mattiello’s bill, a judge would determine if an order to seize a person’s guns is needed following an affidavit from police, prosecutors or members of the individual’s family. The order would force those affected to hand over their firearms to police or a licensed gun dealer for safekeeping pending a hearing. It would also report the subject to the FBI to be placed in the records of the National Instant Criminal Background Check System as a prohibited firearms possessor, which would bar them from buying more guns.

“Behavioral health issues are increasingly causing irrational and unacceptable behavior and these individuals should be stripped of their firearms to protect our children and our society,” Mattiello said. “This legislation is an effective step and an important tool to help law enforcement intervene and prevent tragic outcomes from occurring.”

Passed in California, Oregon, and Washington recently with help of national gun control groups, ERPOs have generally been panned by Second Amendment groups as a violation of due process rights that offer no medical help to those found genuinely in need of treatment.