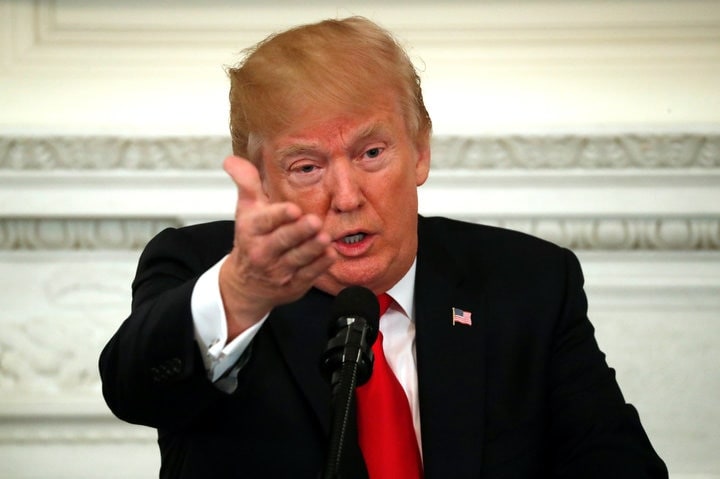 U.S. President Donald Trump holds a discussion about school shootings with state governors from around the country at the White House in Washington, U.S. February 26, 2018. (Photo: Jonathan Ernst/Reuters)

President Donald Trump reiterated this week his commitment to regulating bump stocks, even if Congress doesn’t share his feelings.

“I’m writing that out myself,” he told a group of state governors at the White House on Monday. “I don’t care if Congress does it or not, I’m writing it out myself.”

Trump’s comments come one week after he directed the Department of Justice to craft regulations for the firearm accessory known to increase the rate of fire, mimicking a fully automatic weapon. Bump stocks gained notoriety in October after a lone gunman mowed down 58 people and wounded more than 500 others on the Las Vegas strip with a dozen rifles modified with the devices.

“You put it into the machine gun category, which is what it is. It becomes essentially a machine gun,” Trump said. “It’s going to be very hard to get them.”

Questions linger about whether any bump stock regulations from the Bureau of Alcohol, Tobacco, Firearms and Explosives will hold up in court, given the agency’s previous insistence the devices were beyond its authoritative reach.

“The ATF has been directed to write a regulation that is stronger then the law,” said Rick Vasquez, the retired ATF agent who decided against regulating bump stocks in 2010. “An agency can write regulations, but only Congress can write laws.”

Vasquez first analyzed the devices eight years ago after Texas-based bump stock manufacturer Slide Fire Solutions sought a determination from the agency regarding their product’s classification under the Gun Control Act of 1968 and the National Firearms Act of 1934.

At the time, ATF deemed bump stocks as nothing more than an unregulated accessory — not a machine gun, or capable of converting a semi-automatic firearm into a fully automatic firearm, either. Vasquez stood by his decision in an Oct. 7 Facebook statement.

Bipartisan measures in both the House and the Senate to ban bump stocks sit without action. Senate Minority Leader Chuck Schumer agreed only lawmakers can “close the loophole” in a statement to CNN last week.

“There are serious problems with the President’s approach,” Schumer said. “First, his own ATF agency has warned that it does not have the authority to ban bump stocks. The only way to close this loophole permanently is legislation. He should call on Congress to pass Senator Feinstein’s bill to ban bump stocks, rather than just draft memos. On far too many issues, this administration has been all talk and little action — we can’t afford that approach when it comes to curbing gun violence.”