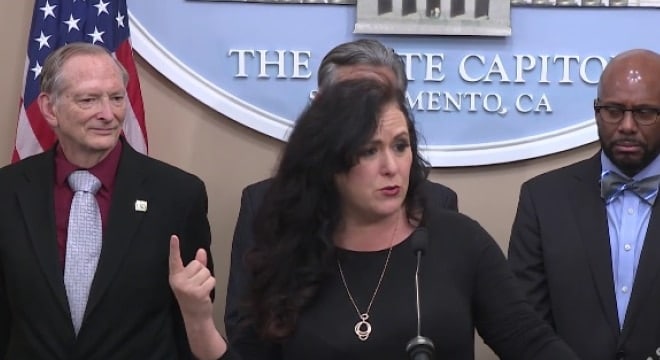 California Assemblywoman Lorena Gonzalez Fletcher joined a host of other Democrats in a press conference this week in an effort to publicize a new campaign for more gun regulations in the state. (Photo: Screengrab via California Assembly Network)

“We are going to attack this problem from every single side we see possible,” said Assemblywoman Lorena Gonzalez Fletcher when talking about a bevy of budding additions to California’s gun laws.

The bills, some filed weeks ago, were highlighted at a press conference this week by their sponsors, all Democrats in the California Assembly. As each lawmaker spoke about their proposed legislation, they cited a recent shooting at Marjory Stoneman Douglas High School in Parkland, Florida as an impetus behind the move to bring more gun regulations to the state. The proposals range from expanding extreme risk protection orders to modifying gun “buybacks” and further tweaking the ever-evolving definition of what constitutes an “assault weapon” in the state.

“While I am proud to say that California is home to some of the strictest gun laws in the nation, you know there is still work to be done,” said Assemblyman Bill Quirk of Hayward.

Assemblyman David Chiu, a San Fransisco area lawmaker who has been authoring gun control legislation for two decades, spoke about the importance of expanding assault weapon laws in California. As noted by the Associated Press, one Assembly bill now underway would expand the definition of such firearms in the state to include semi-automatic rifles without fixed magazines, a move which would target popular “featureless” rifles which are compliant with current California law.

Assemblyman Philip Ting has a placeholder bill which he aims to turn into an expansion of California’s extreme risk protection order program. Currently, the framework allows for prosecutors, police or the family of an individual thought at risk, to seek an order from a judge to remove a subject’s firearms. Ting would enlarge this pool of tipsters to include people an individual goes to school with or works alongside, as well as mental health professionals.

AB 1903, by Assemblywoman Lorena Gonzalez Fletcher, would mandate that gift cards and certificates given in gun buybacks can’t be issued by businesses that sell firearms or ammunition. Gonzalez Fletcher said that she saw Wal-Mart gift cards at a recent event in her area and called it “hypocritical and almost a waste of taxpayer dollars” to take in “old, often useless guns” for cards that can be used to buy new ones.

AB 1927, by Assemblyman Rob Bonita, would establish a “Do Not Sell” list for Californians to voluntarily add their name to void their own gun rights. Licenced dealers who transfer a gun to someone on the list, which would be shared with the FBI, could face felony charges. Described as “temporary voluntary self-prohibition” by gun control advocates, the move is touted as useful in suicide prevention.

AB 1968, by Assemblyman Evan Low, would mandate that those taken into custody by authorities twice in a five-year period over mental health concerns, termed a “5150” in California, would lose their firearms rights for the rest of their lives.

AB 2222, sponsored by Assemblyman Bill Quirk, would require all law enforcement agencies to log information on recovered guns into the state’s Automated Firearms System within three days of possession. Current regulations only require police and sheriffs’ departments to log guns and sets no deadline.

AB 2382, by Assemblyman Mike Gipson, aims to “reduce the flow of unregistered weapons” in the state by regulating the sale of unfinished lowers in the the same way as firearms. So-called “80-percent” lowers, targeted without success in the past by Gipson, are subject to varying definitions.

AB 2526, by Assemblywoman Blanca Rubio, would speed up extreme risk protective orders by allowing judges to issue a verbal order to police to seize firearms from those thought to be at risk. A second bill sponsored by Rubio would provide for a lifetime firearms ban for those with misdemeanor domestic violence convictions.

AB 2781, by Low, would require the state to look into the feasibility of establishing a ballistic database of guns sold in California. Other states, for instance, Maryland, have tried such a concept in the past and walked away from the practice after it was found to be ineffective and a waste of public funds.