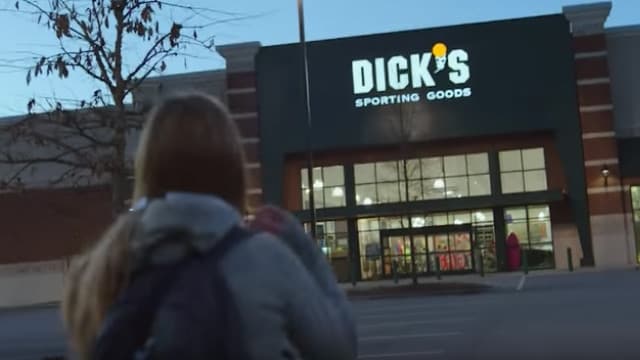 Inspired by the student-led movement to reform gun laws, retail chain Dick’s Sporting Goods announced Wednesday that it will no longer sell guns to buyers under the age of 21 nor will it carry “assault-style rifles,” high capacity magazines or bump stocks.

“We have heard you. The nation has heard you,” said Edward Stack, Dick’s chairman and chief executive officer, to students across the nation and victims from Marjory Stoneman Douglas High School in Parkland, Florida who have been vocal about their support for gun control following the shooting.

On Valentine’s Day, a gunman walked into the high school and opened fire with an AR-15. In about six minutes, he murdered 17 people and injured another 14. The shooter was later arrested without incident about two miles away from the school.

Stack explained that none of the rules or laws in place prevented the 19-year-old shooter from buying a shotgun from a Dick’s store in November 2017. “It was not the gun, nor type of gun, he used in the shooting. But it could have been,” he added.

“Clearly this indicates on so many levels that the systems in place are not effective to protect our kids and our citizens,” Stack said. “We believe it’s time to do something about it.”

“Some will say these steps can’t guarantee tragedies like Parkland will never happen again. They may be correct – but if common sense reform is enacted and even one life is saved, it will have been worth it,” Stack said.

Gun control group Everytown for Gun Safety applauded Dick’s civic action. The group’s president, John Feinblatt, said “it’s a testament to how much the gun debate has changed since the devastating shooting in Parkland” and encouraged other retailers to follow its lead.

Lawmakers have already proposed an assault weapons ban, but such legislation has traditionally been untenable. However, politicians on both sides of the aisle and of various ranks have expressed support for upping the gun purchasing age despite opposition by pro-gun groups.

Yet, this isn’t the first time Dick’s has taken action on gun sales. In the wake of the horrific Sandy Hook school shooting in 2012, Dick’s ended the sale of AR rifles at its major stores, but the company’s Field & Stream stores maintained the items. With the updated policy, those types of rifles will be removed completely.

The announcement has had a slight impact on market values for publicly traded gun companies. By closing, Sturm, Ruger & Company’s stock price fell 6.6 percent, American Outdoor Brands fell by 3 percent, and Vista Outdoor  fell by 4.2 percent. Dick’s stock price fluctuated throughout the day but increased by the end of the day by 0.6 percent.

Earlier this month, Barclay’s financial service downgraded Dick’s stock to “underweight,” meaning investors should reduce their percentage of shares. The reasoning was that Dick’s had a mediocre performance during holiday shopping season due to robust competition in athletic wear and a soft hunting season.

Seeking Alpha, a market and financial news website, said analysts consider Dick’s move to be more meaningful than the corporate backlash on the NRA. More than a dozen companies ended partnerships with the gun lobby, so the group’s members could no longer receive discounted rates on their services.

On social media, Dick’s has received mixed responses to the statement, with some people thanking the company for taking action while others commenting that they’ll take their business elsewhere.