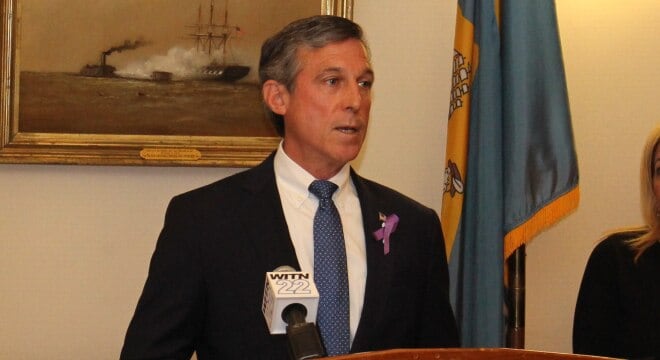 Delaware Gov. John Carney, along with others, is backing a ban on some guns in the state. (Photo: Governor’s office)

Gov. John Carney wants to prohibit the sale of some types of semi-auto rifles in Delaware, while on the West Coast, Washington Gov. Jay Inslee wants to make it harder to buy select guns.

The governors, both Democrats, are urging lawmakers in their state to move on prohibitions and regulations targeting guns such as the AR-15 in the wake of the Parkland, Florida school shooting that killed 17 earlier this month. For Carney, he says although Delaware already has strong gun laws, the move to ban some semi-autos is needed for public safety.

“As we have seen in Las Vegas, Parkland, and in many other horrific incidents across our country, military-style weapons can be used to carry out catastrophic acts of violence,” Carney said in a statement. “They have no place on the streets of our neighborhoods.”

Carney, a proponent of expanding mandatory gun surrenders and the list of prohibited firearm possessors in the state, this week joined a coalition of East Coast governors with the avowed intent of working towards stronger gun policy.

On the Pacific, Inslee has backed moves to ban bump stocks and up regulations on guns in the past and is calling for further action by advocating a more extensive background check for those seeking to buy guns like an AR-15 and pushing the age threshold for purchases from 18 to 21.

Elsewhere, Republicans in the Florida legislature have fended off at least three attempts in the past week at an assault weapon ban in that state while a wide-ranging measure to ban most semi-auto, track ammo sales and outlaw suppressors has been proposed in by Democrats in Minnesota.