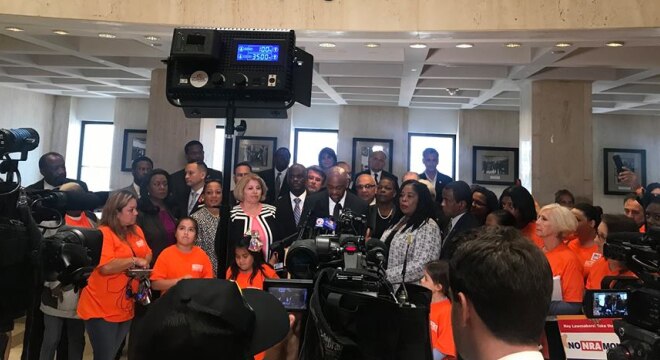 Florida Democrats, bolstered by gun control advocates, pushed hard for a ban on “assault weapons” this week at the Capitol, but came away with almost everything but. (Photo: FlaDems)

Lawmakers in Florida, historically one of the most pro-gun states, on Monday gave initial approval to a plan that would change a number of the state’s firearm regulations.

The Republican-controlled Florida Senate Committee on Rules passed SB 7026 in a 9-4 vote before a packed crowd this week. The measure, which aligns with a list of proposals backed by Republican Gov. Rick Scott in the aftermath of the Marjory Stoneman Douglas High School shooting in Parkland, Florida earlier this month, would ban bump stocks, expand waiting periods and raise the age to buy any gun in the state to 21, ups school security and institutes a number of mental health changes.

“Nothing we will do in the State Legislature will fill the void created in the families of the victims, their school, or their community,” said state Senate President Joe Negron, R-Stuart. “However, this comprehensive legislation will honor their memory by helping to ensure every community across the state has the resources needed to identify and treat those suffering from mental illness, to improve the safety and security of local schools, and to ensure those suffering from mental illness do not have access to firearms.”

The omnibus package requires a three-day waiting period for all gun sales in the state with exceptions for those with a concealed weapons permits or, in the purchase of a rifle or shotgun, proof of completing a 16-hour hunter safety course. Current state law only mandates the waiting period for handguns.

Next, it bans bump fire stocks defined as any sort of accessory that is “used to alter the rate of fire of a firearm to mimic automatic weapon fire or which is used to increase the rate of fire of a semiautomatic firearm.” Those who violate the restriction are subject to a third-degree felony which provides up to five years in prison and a $5,000 fine. Florida would be the third state to ban such devices since they were used in the Route 91 Harvest festival shooting in Las Vegas last October, following the same path as New Jersey and Massachusetts.

Those under 21 in Florida would be unable to purchase any modern firearm under SB 2872. There would be exceptions for those who are in corrections, law enforcement or the military. Gun rights groups argue such a measure arbitrarily strips the right to keep and bear arms away from those under 21 who, in most cases, are considered adults by any other standard. Current state law mimics federal code which allows for those under 21 to buy shotguns and rifles.

School security gets a big nod in the form of the new Florida Sheriff’s Marshal Program, which would allow schools and sheriffs departments to work together to send volunteer school faculty through a 132-hour course to produce campus staff that are dual-hatted as special deputy sheriffs to allow them to carry concealed firearms on school grounds. A similar program has been in use in Polk County for the past few years. Florida does not allow for campus carry except by law enforcement.

The bill would also establish the framework for extreme risk protection orders, so-called “red flag” programs that would allow police to take guns away from people deemed by a judge to be dangerous. California, Oregon, and Washington have passed similar legislation in recent years, backed by national gun control organizations. Second Amendment and civil liberties groups historically oppose such initiatives, characterizing them as trampling on due process rights and terming them “turn in your neighbor” laws.

What did not pass as part of the bill was an amendment by Senate Democrats to ban guns classified as “assault weapons” and their associated magazines. The rejection of the amendment in a close 7-6 vote drew howls from gun control advocates in the meeting.

Amendment to ban sale or transfer of about 80 assault weapons in Florida does not pass. Demonstrators begin chanting “Shame.” And “Vote them out.” #RallyInTally pic.twitter.com/JsDE91CdY5

Senate Democratic Leader Oscar Braynon, D-Miami Gardens, said that, although the other measures are needed, the move for gun control falls flat without the ban.

“We can beef up mental health screenings, raise the age for gun purchases, and dream up other stop-gap measures, but the threat to our children and our citizens will continue until we finally take bold action to ban assault weapons designed for the battlefield from easy access in our communities,” said Braynon. “Without that, the voices of the students, and the will of the people, continue to be ignored.”