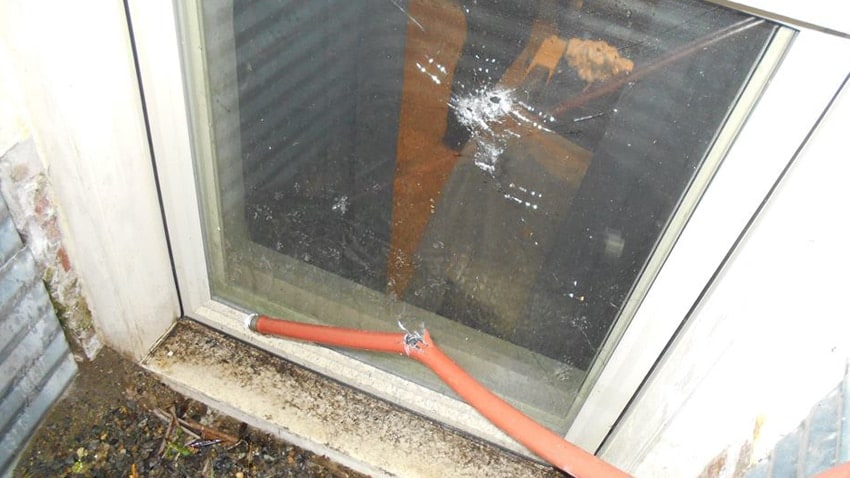 The homeowner fired through his window at the suspect on Feb. 19. (Photo: Pierce Sheriff’s Office)

Authorities say the 24-year-old suspect was well known to deputies and they also think he was responsible for another burglary attempt at a neighbor’s house about an hour before the shooting.

At 1:20 am on Feb. 19, police said they received a call from a neighbor saying he heard someone starting up his riding lawn mower and then saw a man run down his driveway. The neighbor then discovered the man had tried to break into his car and house before entering his shed.

About an hour later, deputies responded to another call from the homeowner’s wife, saying her husband shot a burglar. When deputies arrived, they found the suspect laying in the grass suffering from two gunshot wounds.

The homeowners said when they were sleeping, they heard the suspect prowling outside their house and then saw their motion light flip on. When they checked on their kids — an infant and a toddler — who slept in the same room, they saw the suspect standing outside the window.

The husband told his wife to call 911, moved his kids outside the room and then pulled back on the curtains to find the suspect crotched down below the glass. Fearing for his life, he yelled for the suspect to stop and then fired four shots, striking him twice.

Authorities transported the suspect to a nearby hospital for medical treatment. Authorities said they expect to charge him with two burglaries.

The Pierce sheriff’s office said the suspect had a history of similar behavior. He was recently released from jail after serving a month-long sentence for vehicle prowling. On New Year’s Eve, he was arrested trying to break into a car.