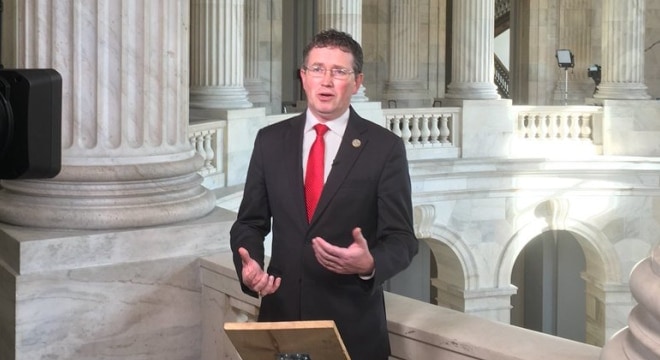 U.S. Rep. Thomas Massie holds that, rather than bump up the age for rifle sales to 21, the country would be better suited to drop the handgun purchase threshold to 18. (Photo: Massie’s office)

A Kentucky Republican has introduced a measure that flips the argument on current trending gun control legislation by holding the age to buy any gun in the U.S. should be dropped to 18.

U.S. Rep. Thomas Massie has proposed H.R. 5112 which would reduce, from 21 to 18, the minimum age at which someone can obtain a handgun from a licensed gun dealer. The move is the polar opposite of recent proposals backed by gun control advocates, various lawmakers and even for a time President Trump, to raise the age for gun purchases from 18 to 21.

“If you raise the age to buy a long gun from 18 to 21 while keeping the age to buy a handgun at 21, you have completely extinguished the constitutionally guaranteed right of 20-year-old mothers to keep and bear arms,” said Massie on social media. The lawmaker, chair of the Congressional Second Amendment Caucus, made the same argument last Sunday on Meet the Press.

The proposal comes as a counter to a movement backed by governors in several states as well as both Democrats and Republicans on Capitol Hill to raise the minimum age to buy a rifle to 21, sparked by the use of an AR-15 by a 19-year-old man to kill 17 at the Marjory Stoneman Douglas High School in Parkland, Florida.

Massie’s bill, which has no co-sponsors, has been referred to the House Committee on the Judiciary, but it is not without precedent. Last year, Utah lowered the age to seek a concealed carry permit from 21 to 18.