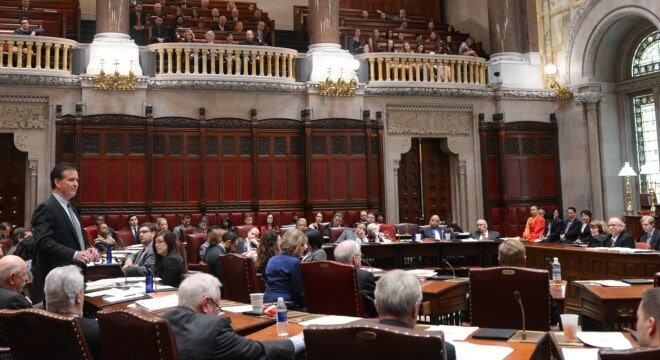 Senate Democrats were able to force a vote on a series of gun control bills in the Republican-controlled chamber but didn’t have enough supporters to see them pass. (Photo: nysenate.gov)

With a razor-thin majority, New York Senate Republicans on Wednesday were able to reject a host of partisan measures pushed by Democrats as “common sense” bills to fight gun violence.

Senate Majority Leader John Flanagan, R-Suffolk County, the temporary president of the chamber, rejected the bills which were offered as amendments to an uncontroversial hunting measure. Democrats, for their part, were unable to garner enough votes to override Flanagan and no GOP members broke ranks to side with the minority Dems. For Flanagan, he argues the time is ripe to talk about secure schools instead.

“Our Senate Republican Majority is hard at work on a comprehensive school safety plan that will ensure the state provides the support necessary to strengthen school security and keep students safe,” said the Republican boss in a statement. “We have had productive internal discussions this week on the concepts of a full legislative package, and expect to act as early as next week.”

The quartet of measures forced for a vote by Democrats, part of a group of nine bills introduced before the high-profile shooting in Parkland, Florida that has held the national news cycle for the past two weeks, are varied in nature. They include a proposal to establish a 10-day waiting period to conduct background checks on gun purchases, another to ban bumps, and one to establish Extreme Risk Protection Orders so courts could issue an order to seize guns from individuals reported to be at risk to themselves. A fourth bill would create a taxpayer-funded “Firearm Violence Research Institute” to study gun violence as a public health issue.

Democrats were not happy with the rebuff. “The madness must stop. We need to get serious about gun safety and we need to take real action,” said Senate Minority Leader Andrea Stewart-Cousins. “Studies have proven that states, like New York, with stronger firearm safety laws, have fewer gun-caused deaths. Unfortunately, my colleagues on the other side of the aisle have taken their lead from their extremist Washington allies and for years have refused to move any common sense gun laws.”