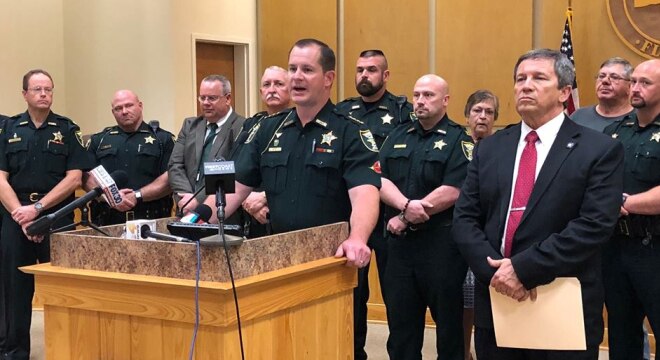 “If you attack our schools, it will be the last thing you ever do,” says a Florida sheriff working with the local school board to train volunteer teachers and faculty to become special deputies. (Photo: PCSO)

Putnam County Sheriff H. D. “Gator” DeLoach, joined with county school board representatives and Superintendent Dr. Rick Surrency to announce progress on a program that would deputize screened and trained volunteers so they could carry concealed handguns on campus. The program is the second in the state to arm teachers and the first to partner with a public school system in the immediate aftermath of a shooting at Marjory Stoneman Douglas High School in Parkland.

Dubbed the STAR program — for Sheriff’s Trained Armed Response — volunteer school personnel would receive 150 hours of training from certified police instructors in firearms use, liability and active shooter tactics. Some two-thirds of the training will be dedicated to firearm proficiency, with candidates shooting about 1,000 rounds in practice. Guns will be selected and issued by the sheriff’s department and those school employees deputized will only have law enforcement authority on campus. DeLoach’s department will pick up all costs.

“We know that if an assailant enters a school, we have only a very few minutes to stop the threat. Highly qualified and well-trained Special Deputies can successfully augment our Youth Resource Deputies and will save lives should the unthinkable happen,” said DeLoach.

A similar program, organized by the Polk County Sheriff, is used at two private colleges in the state. Meanwhile, a bill to authorize a statewide Florida Sheriff’s Marshal Program along the same lines is rapidly moving through the state Senate.

Florida does not allow for campus carry except by law enforcement.