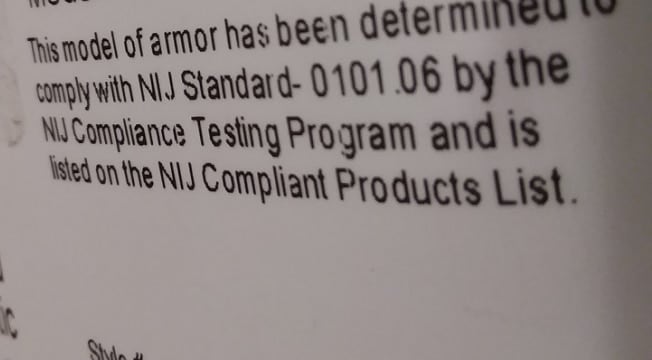 The U.S. Justice Department wants it known their NIJ agency only certifies body armor, such as shown on the above label. (Photo: Chris Eger/Guns.com)

With sales of what is often described as “bulletproof” backpacks surging in the weeks after a high-profile shoot shooting, the Justice Department wants it known they have not issued any certifications on such items.

“The National Institute of Justice—the research, development, and evaluation agency of the Department of Justice—has never tested nor certified ballistic items, such as backpacks, blankets, or briefcases, other than body armor for law enforcement,” said DOJ spokesman Devin O’Malley in a statement. “Marketing that claims NIJ testing or certification for such products is false.”

Certified NIJ ratings for the ballistic resistance of body armor, which is a strictly defined process, is only performed at a handful of accredited laboratories. The agency maintains a public list of compliant armor including threat level and warranty period.

In recent weeks, sales of ballistic resistant backpacks have swelled, with one company reportedly selling out in just three days after a shooting in Parkland that left 17 students and faculty dead.

In testing done by ABC and CBS, both networks found a backpack model from Guard Dog Security capable of stopping handgun rounds and shotgun buckshot, but not rifle rounds.