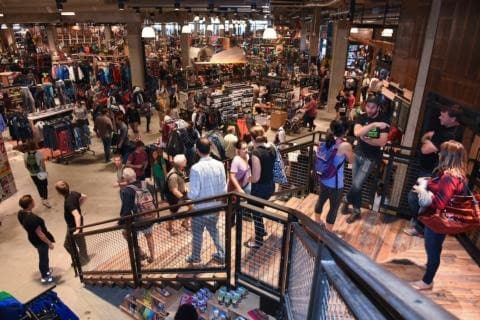 REI and Mountain Equipment Co-op announced the decision Thursday after customers pressured the respective retailers to cut ties with Vista in the wake of the Parkland shooting last month. Vista’s “silence” on gun control and close ties with the National Rifle Association even inspired angry REI patrons to draft an online petition demanding the retailer drop Vista products entirely. The petition garnered more than 18,500 signatures as of Friday.

“REI does not sell guns,” the company said in a news release Thursday. “We believe that it is the job of companies that manufacture and sell guns and ammunition to work towards common sense solutions that prevent the type of violence that happened in Florida last month.”

REI applauded moves from corporate leadership at Dick’s Sporting Goods and Walmart for voluntarily banning firearm and ammo sale to customers under 21. Dick’s Chief Executive Officer Edward Stack said “assault-style” rifles would be discontinued permanently from the retailer’s more than 800 locations nationwide, as well as its three dozen Field and Stream stores.

“We learned that Vista does not plan to make a public statement that outlines a clear plan of action,” REI said of its dealings with the gun maker over the last week. “As a result, we have decided to place a hold on future orders of products that Vista sells through REI while we assess how Vista proceeds. Companies are showing they can contribute if they are willing to lead. We encourage Vista to do just that.”

“Thousands of MEC members have contacted us to express their concerns and to ask that we stop selling products made by these brands,” said MEC Chief Executive Officer David Labistour in an open letter published Thursday. “We’ve also heard from members who believe that purchasing decisions like these should be left to individual consumers and that MEC should not get involved. The fact is, the debate has involved us and as a member-based organization we are compelled to respond.”

Labistour, a military veteran, said he identifies with both sides of the gun debate, but ultimately leaned in favor of the portion of MEC’s 5.5 million members opposed to Vista brands, saying, “I believe that engagement is the path to change, as tough as it might be.”

“From what we’ve heard, we know that no decision we make will satisfy everyone,” he said.” We are in the midst of a complex and highly charged debate with as many opinions as there are people expressing them … My responsibility as CEO is to ensure that we make thoughtful, informed decisions in the best interest of our Co-op and effect change where this is possible and consistent with our presence in the marketplace.”

The news tanked share prices for Vista by more than 10 percent as of midday Friday. The company has yet to respond to a request for comment from Guns.com.