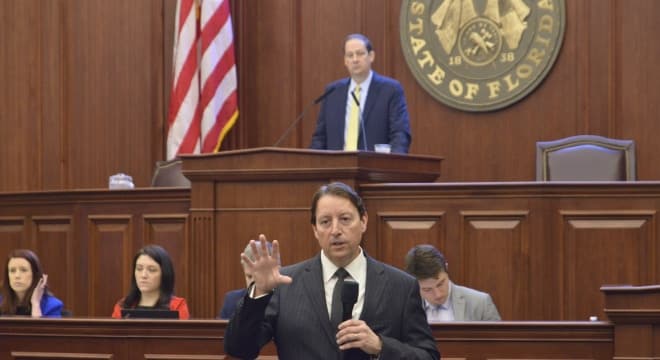 As at least one gun rights group promises a lawsuit should the bill become law, Republicans in the Florida Senate continue to repel efforts to install an “assault weapon” ban.

The multi-tiered bill, SB 7026, would ban bump stocks, expand waiting periods and raise the age to buy any gun in the state to 21, ups school security to the tune of $400 million and institutes a number of other changes. One thing it will not do, for now, is establish a ban on some types of firearms and their magazines that meet a list of guidelines proposed by state Democrats.

After fighting off a general assault weapon ban in committee last week, lawmakers swatted away another attempt Saturday followed by a more limited amendment to implement a two-year exploratory ban. The time-limited measure reportedly passed a voice vote but came up short, 17-21, in a roll call. A blizzard of 128 proposed floor amendments in the past week, most of which have been defeated or otherwise not considered, included proposals to add everything from mandatory gun lock usage to a statewide gun registry to the bill.

“This bill is a classic example of a fundamentally good bill destroyed by countless amendments,” said gun rights group Florida Carry, which supports increasing school security but none of the gun control aspects of the legislation.

State Sen. Bill Galvano, the Republican sponsor of SB 7026, has described the package as a compromise bill. “We have to start somewhere,” Galvano said. “We have to take more seriously than ever before the issue of security in our schools, the safety in our schools. This bill really is unprecedented.”

As it stands, SB 7026 requires a three-day waiting period for all gun sales in the state with exceptions for those with a concealed weapons permits or, in the purchase of a rifle or shotgun, proof of completing a 16-hour hunter safety course. Current state law only mandates the waiting period for handguns.

Next, it bans bump fire stocks defined as any sort of accessory that is “used to alter the rate of fire of a firearm to mimic automatic weapon fire or which is used to increase the rate of fire of a semiautomatic firearm.” Those who violate the restriction are subject to a third-degree felony, which provides up to five years in prison and a $5,000 fine.

Those under 21 in Florida would be unable to purchase any modern firearm under the measure. There would be exceptions for those who are in corrections, law enforcement or the military. Florida Students for Concealed Carry argue the increase in the minimum age limit would strip the gun rights of thousands of adults, hinting at a lawsuit.

“As it was written this bill has massive constitutional problems, and if House and Senate leadership think this section will stand in the 11th Circuit we wish them luck,” warned the group.

School security gets a big nod in the form of the proposed “Coach Aaron Feis Guardian Program,” named after a faculty member killed at Marjory Stoneman Douglas High School. The plan would allow schools and sheriffs departments to work together to send volunteer school faculty through a 132-hour course to produce campus staff that are dual-hatted as special deputy sheriffs to allow them to carry concealed firearms on school grounds. Democrats were able to add a mandate that guardians take a 12-hour diversity training course on top of the proposed guidelines.

Lawmakers are set to take up the bill Monday with Gov. Rick Scott, a Republican, in favor of most of the language, with exception of the guardian program. “I’ve been very clear,” Scott said last week. “I want to make sure we have significant law enforcement presence at every school. I want to make sure we harden our schools. But I don’t support arming teachers.”