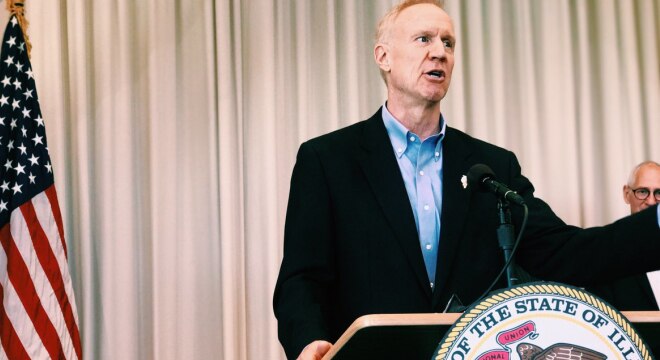 Gov. Bruce Rauner has 60 days to either approve or reject the bill or let it pass into law without his signature but has been coy about his intentions. (Photo: Rauner’s office)

Illinois’s Republican Gov. Bruce Rauner is being lobbied hard to act on a measure on his desk that would add regulation to gun stores in the state.

The bill, SB 1657, would mandate a $1,000 five-year state permitting process for already federally licensed gun dealers. With many of his fellow Republicans against the proposal, it took over a year to reach the governor’s hands, passing the Senate last April in a 30-21 vote and the House last week 64-52.

Influential Democrats and gun control advocates say the legislation is ripe for Rauner’s signature. Arguments in favor of the licensing scheme say it will help combat illegal guns on the streets of Chicago.

Opposing the bill are both state and national gun rights groups, who hold the additional layer of government oversight is unneeded and creates artificial barriers to engaging in the business of selling guns lawfully in the state. Grassroots efforts saw more than 14,000 witness slips filed with lawmakers by those against the proposal — more than twice the number filed for those who supported more licensing. Open polls mirror those results.

The legislation comes at a tricky time for Rauner, who is facing challenger Jeanne Ives in the upcoming GOP primary in two weeks. Though recent polling shows Rauner with a commanding lead over the state legislator, she recently voted against SB 1657.

Rauner, who has 60 days to either approve or reject the bill or let it pass into law without his signature, has been coy about his intentions.

“We have to do everything we can to protect our citizens, protect our second amendment and not burden our small businesses,” said Rauner spokesman Will Allison. “The bill just got to the Governor’s desk and he will look at it very closely.”