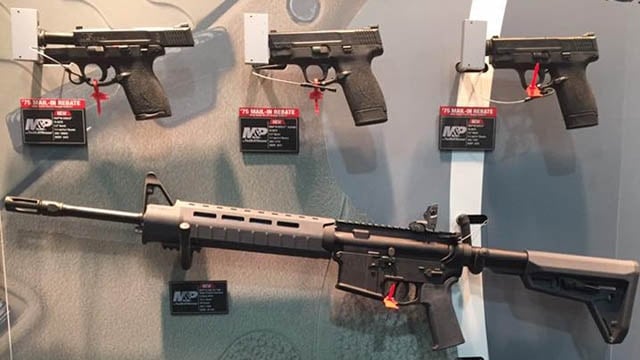 “It’s extremely small,” Debney said. “It’s actually one-tenth of one percentage point of our total sales. So, there isn’t really any impact and, of course, anything like this is obviously built into our guidance going forward.”

He said modern sporting rifles represent between 10 percent and 12 percent of the company’s total revenue — far behind the 55 percent generated from handguns and the 25 percent from other outdoor product lines, the latter of which Debney credits for helping the company weather a difficult year for gun sales.

“Overall, our long term strategy remains focused on being the leading provider of quality product for the shooting, hunting and rugged outdoor enthusiast,” he said. “Continued growth in our outdoor products and accessories business helped us better balance our overall revenue by mitigating the volatility we have experienced with our firearms business.”

“Going forward, we will operate our business under the assumption that the next 12 to 18 months could deliver flattish revenues in firearms,” he said.

Debney and Chief Financial Officer Jeffrey Buchanan wouldn’t forecast how the corporate backlash over the recent mass shooting in southern Florida would impact the company’s earnings. “What’s going to happen in 12 months or six months is a little hard to speculate right now since the environment overall right now politically and otherwise is pretty, pretty volatile,” Buchanan said.

Walmart, Kroger, and L.L. Bean followed Dick’s lead last week, implementing similar policies as a response to the Valentine’s Day shooting at a high school in Parkland, Florida that left 17 dead and more than a dozen injured.

REI and Mountain Equipment Co-Op likewise halted new orders with Vista Outdoor over the company’s significant profits from firearms and ammunition and its ties with the National Rifle Association.

“REI does not sell guns,” the retailer said in a news release Thursday. “We believe that it is the job of companies that manufacture and sell guns and ammunition to work towards common sense solutions that prevent the type of violence that happened in Florida last month.”

Debney addressed the shooting during a conference call with investors Thursday, calling it “incomprehensible and a senseless loss of life.”

“We share the desire to make our community safer,” he said. “Through our membership and work with the National Shooting Sports Foundation, we will continue to support the development of effective solutions that accomplished that objective while protecting the rights of the law-abiding firearm owner.”