Dating app Bumble is scrubbing profiles of anything gun-related 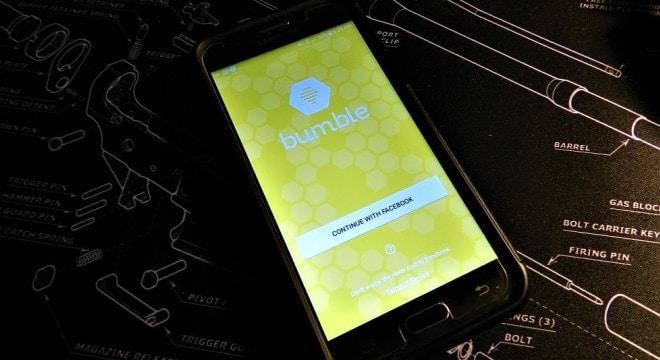 Bumble says gun photos and eventually, even mentions of firearms will be removed, with allowances for uniformed military and police. (Photo: Chris Eger/Guns/com)

One of the largest social dating apps in the country announced they are on a mission to “ban guns across the platform.”

Bumble announced on Monday their newest initiative: moderating all photos for the presence of guns, with exceptions made for military and law enforcement in uniform, who, presumably, will still be allowed to flex with the grenade launchers and M4s of their choosing. Those behind the app say the move is to make the platform, and the society it represents, safer.

“As mass shootings continue to devastate communities across the country, it’s time to state unequivocally that gun violence is not in line with our values, nor do these weapons belong on Bumble,” the company said in an announcement, which goes on to say the company is making a $100,000 donation to March For Our Lives, an project between some survivors of the Parkland, Florida school shooting and gun control groups.

A brigade of some 5,000 moderators will search through the millions of images that have been uploaded and comb out objectionable firearm content, The New York Times reported. Bumble founder and Tinder co-founder Whitney Wolfe Herd said the moderators will eventually transition to weeding out mentions of guns as well.

Those who have their images pulled can apply to have them reinstated. Forbes reported last year Bumble had amassed over 22 million registered users and is projected to pass $200 million in sales in 2018 through the use of “tailored, hyperlocal advertising.” The company’s valuation is considered to be north of $1 billion.