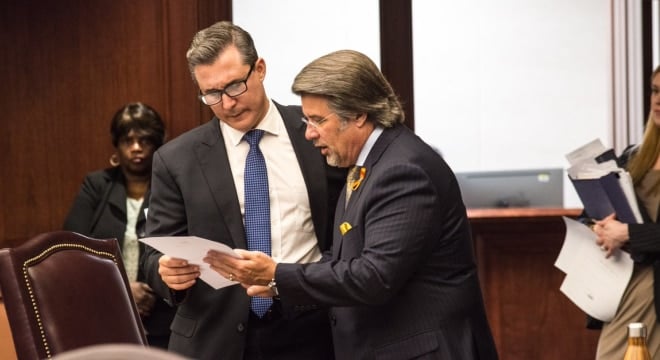 Lawmakers in the Florida Senate have hammered out a proposal, broad in scope, that tightens the states gun laws in a number of ways. The bill was rushed from introduction to passage in 13 days. (Photo: FL Senate)

With critics on both sides of the argument unhappy with elements of the rushed legislation, a broad gun control bill squeaked through the state Senate on Monday.

Just two weeks old, SB 7026 managed to pass the Republican-controlled body 20-18 with lawmakers on both sides of the aisle crossing over. The bill would ban bump stocks, up school security, raise the age to purchase all gun in the state to 21 and extend the current three-day wait for long arms.

One amendment adopted at the last-minute on Monday bars classroom teachers from participating in an armed school staff program that is part of the bill. The move to pass the bill, the most successful and sweeping attempt at gun control in Florida’s recent legislative history, was triggered by a shooting in Parkland on Feb. 14 and is named in honor of the tragic event.

“The opportunity to meet with and listen to survivors of the Marjory Stoneman Douglas High School shooting as well as the families of the victims has had a tremendous impact on each and every Senator and has significantly influenced the development of this important legislation,” said the bill’s sponsor, state Sen. Bill Galvano, R-Bradenton.

Among the sections of SB 7026 are provisions that make it a felony to possess a bump stock or similar device, raise the age to buy rifles and shotguns to 21 statewide, and mandate a three-day wait on most gun transfers.

The bill includes some $400 million in authorizations, including $26 million for new buildings at and a memorial for Marjory Stoneman Douglas High School. Some $200 million is set aside for grant programs to harden schools in the state while $69 million would go to fund mental health services.

Finally, another $67 million is included to fund what is being termed the “Coach Aaron Feis Guardian Program,” named after a faculty member killed at the school. The program, with each school facility in the state required to have at least one armed guard, law enforcement officer, or guardian on campus, would train volunteer faculty in a program administered by local sheriffs. In its final form, the bill barred classroom teachers from the initiative with the exception of those who are JROTC instructors, former law enforcement, or military.

By and large, many involved in the discussion around SB 7026 dislike at least a portion of the bill, with gun control advocates against arming school personnel while those stumping for gun rights are opposed to the concept of raising the threshold age to purchase long arms, banning loosely defined bump stocks and expanding the use of arbitrary waiting periods. Democrats failed to include a ban on “assault weapons” into the bill, but not for lack of trying.

The measure heads off to an uncertain future, with the House set to end its session on March 9.