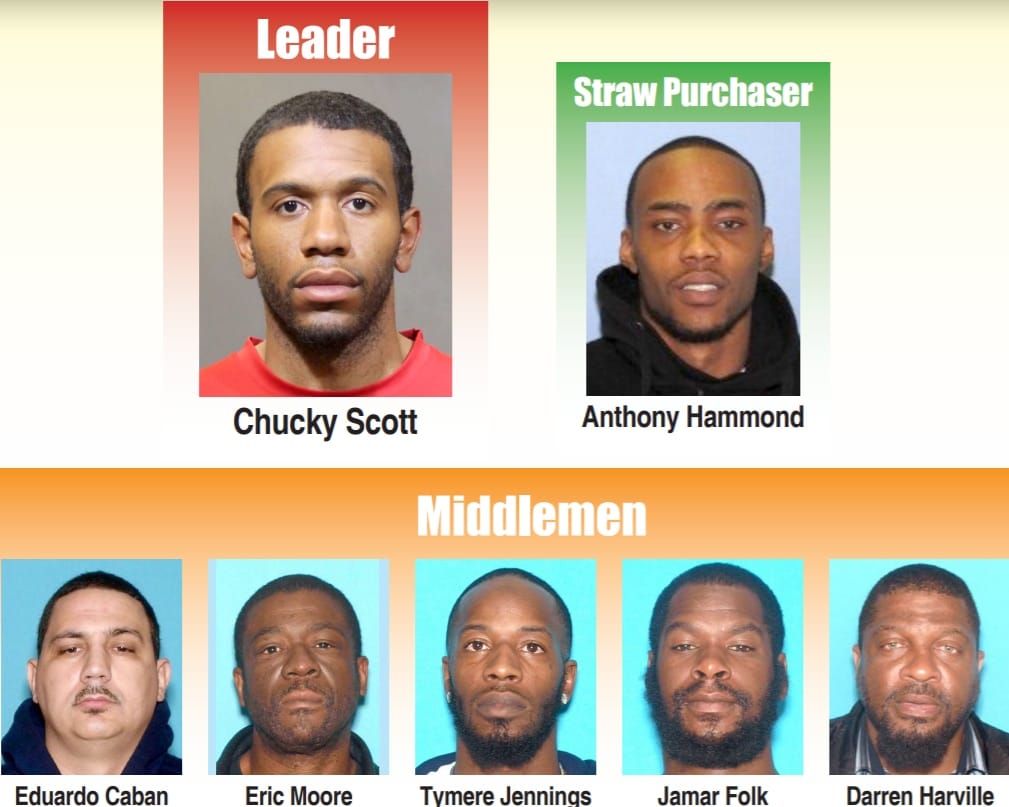 Attorney General Gurbir S. Grewal announced Feb. 14 the men face first-degree racketeering charges, among other felonies, for allegedly arming criminals on the streets of Camden with guns obtained through straw purchases in Ohio.

“Dismantling prolific weapons trafficking is the best way to reduce the number of illegal guns being sold to criminals in our communities and used to inflict murder and terror,” Grewal said. “Each gun that we seize or prevent from reaching the street represents countless lives saved. The potential sentences that these men face should also serve as fair warning to those who illegally traffic firearms into New Jersey.”

State and federal law enforcement uncovered the trafficking operation while investigating accused ring leader Chucky Scott, 25, of Columbus, Ohio, and his accomplice, 26-year-old Anthony Hammond, also of Columbus. According to court documents, Hammond bought dozens of firearms throughout Ohio and turned the weapons over to Scott, who subsequently arranged sales on the black market through five middlemen in New Jersey.

Some of the weapons sold included two “illegal assault rifles” outfitted with large-capacity magazines, six 9mm pistols — four of which also included large-capacity magazines — a .45-caliber pistol and a .40-caliber pistol. The middlemen added a tax to each gun sold and kept it as profit. Some rifles sold for as much as $2,000, investigators said.

“The only purpose Scott and others had by flooding the Camden area with illegal guns was profiting off of the innocent lives of area residents,” said Col. Patrick Callahan, Acting Superintendent of the New Jersey State Police. “I am very proud of the investigative efforts and solid police work exhibited by the members of the New Jersey State Police Trafficking South and Fugitive Units along with our federal, state and local partners.”

Grewal said federal data shows more than three quarters of the guns recovered in New Jersey trace to other states. He said he remains committed to working with federal agencies to destroy the “iron pipeline of firearms” flowing into his state.

“This firearms trafficking case represents the highest level of cooperation, across multiple agencies, jurisdictions, and states,” said Trevor Velinor, Special Agent in Charge of ATF’s Columbus Field Division. “There is no place in our society for those who use firearms for criminal purposes, nor is there a place for those who supply criminals with those firearms. ATF is proud to work with our law enforcement partners to stop those who would foster violence in our communities.”

The men face a $200,000 fine and up to 20 years in prison for each first degree felony charge. A racketeering conviction also includes a mandatory period of parole ineligibility for up to 85 percent of the sentence imposed.