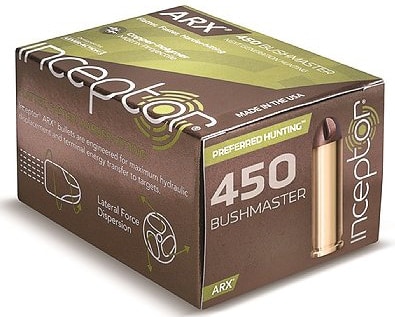 Inceptor introduces a new caliber into its ARX lineup, announcing that the .450 Bushmaster will join the ARX Preferred Hunting ammo series.

Built using Inceptor’s injection-molding process paired with proprietary copper-polymer materials, the .450 Bushmaster load offers hunters a lead-free ammo option. At the heart of the ARX line is the patent-pending ARX projectile. The non-expanding projectile delivers a light, fast, low recoil design that also maintains a flat trajectory, according to the ammo maker.

“Our mission is simple: leverage the latest technologies to create the next generation of defense, training and hunting ammunition with tried and true performance,” the company said in a statement. “We accomplished this mission with the introduction of our Inceptor Preferred Hunting line, featuring the patent-pending Inceptor ARX projectile.”

The .450 Bushmaster joins the Preferred Hunting lineup which already touts 50 Beowulf, .458 SOCOM and .45 Colt Lever. The new .450 Bushmaster load will be available in early spring 2018, according to Inceptor.