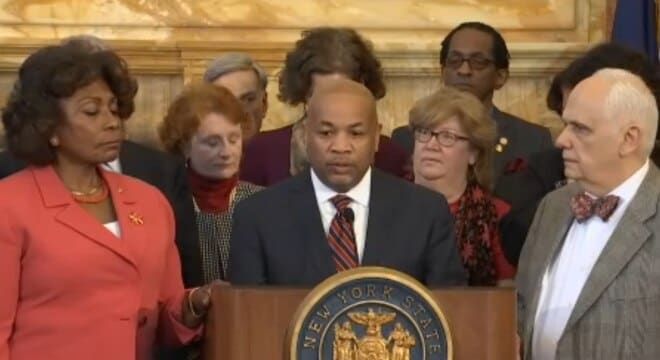 Democrats in the Assembly on Tuesday were able to muscle through a series of increased regulations on guns and bans on some controversial devices.

The package of legislation, five bills in all, aim to ban bump stocks, remove the gun rights of those thought to be a danger to themselves or involved in domestic violence, stretch out waiting background check periods to 10 days, and expand the scope of the checks themselves. The move puts the body at odds with the Republican-controlled state Senate where similar proposals are stalled, but the Assembly’s top Democrat says the measures are needed for public safety.

“Passage of these bills today marks yet another step in our efforts to curb gun violence,” said Speaker Carl E. Heastie, D-Bronx. “Yet it is not the end and we will continue to fight for other common sense gun safety measures so that we can say we have made every effort to address the scourge of gun violence in our communities.”

The bills now headed to the Senate include:

A.2406, which would mandate a 10-day waiting period on pending background checks in the state before a gun could be transferred. Current federal regulations allow for licensed gun dealers to transfer a gun if the check has been delayed more than three days without an answer.

A.5025, a measure structured to expand how domestic violence convictions in the state result in the removal of gun rights for those convicted.

A.8976-B, which would allow for what are termed extreme risk protection orders, a mechanism in which police or a family member of an individual thought to be a threat to themselves or others can petition the court in a simple process to have their guns removed for a year.

A.9958 seeks to ban bump stocks and similar devices such as trigger cranks in New York. While the state has long had a ban on attaching such a device to a firearm, they are still legal to possess and manufacture in the Empire State, a facet lawmakers term a “dangerous loophole.”

A.9978 would require those purchasing guns or applying for a firearm license in New York to waive the confidentiality of their medical records concerning mental health for any other states they have lived. Supporters of the move stress it would allow New York to review those records when considering license applications.

The bills are supported by a number of gun control groups to include Everytown, Giffords, and New Yorkers Against Gun Violence.

“This package of common sense legislation will close gaps in our state law and prevent individuals who are dangerous to themselves and others from accessing guns,” said Rebecca Fischer with NYAGV.

As for the Senate, lawmakers on Monday approved a package of more than a dozen bills aimed at increasing school safety by increasing active shooter drills, mandating armed security, and improving mental health services. This came a week after Senate Majority Leader John Flanagan, R-Suffolk County, torpedoed efforts by chamber Democrats to shoehorn a four-pack of gun control bills past the body.