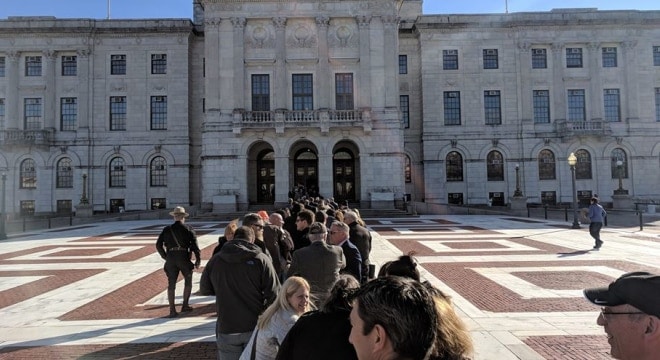 Crowds, estimated by state police to be over 800-strong, crowded the Rhode Island State House this week to talk to legislators about gun control bills. (Photo: RI Gun Blog)

Hundreds wearing shirts that said “Gun control does not work” filled the halls of the Rhode Island State House on Tuesday to let lawmakers know how they felt about pending bills.

So many Second Amendment advocates queued in line this week, the Providence Journal reported that the state fire marshal had to be called in to make sure the building was safe. The subject of the day: a proposed ban on firearms classified as “assault weapons” and a measure to allow police to temporarily confiscate guns from those deemed by a judge to be a potential threat.

“It’s people who assault people,” said Bob Schofield, 86, of Wakefield, who was among those waiting. “It’s not the rifle. I’d rather be the one with the firearm to stop the crazy.”

Among the groups behind the grassroots response were national gun rights organizations as well as local movements such as the Rhode Island 2nd Amendment Coalition and Rhode Island Self Defense Alliance. Besides Second Amendment advocates, the ACLU of Rhode Island has publicly come out against the so-called “red flag” bill, issuing a 14-page analysis slamming the proposal for being overly broad and by nature speculative, making it ripe for potential abuse.

“People who are not alleged to have committed a crime should not be subject to severe deprivations of liberty interests, and deprivations for lengthy periods of time, in the absence of a clear, compelling and immediate showing of need,” said the state ACLU chapter of the legislation.

Powerful Democrats in Rhode Island are behind the push for more gun regulation. Gov. Gina Raimondo, who recently joined with other regional Dems in forming an inter-state gun control pact, issued an executive order last week directing authorities in the state to use all legal steps to remove firearms from the home of those they feel are a danger, paving the way for the red flag bill.

State Attorney General Peter Kilmartin followed up Raimondo’s effort by introducing legislation to add a host of changes to the state’s gun law, including raising the age to buy a shotgun or rifle to 21 and curbing the ability to carry or transport long arms in public — citing a fictional stick-up man on a cable TV show as reason for the latter.

“Anyone who was a fan of the show ‘The Wire’ will remember the character Omar, who carried a loaded shotgun as he walked down the streets of Baltimore,” Kilmartin said in a statement. “We don’t need to turn the streets of Rhode Island into a war zone and need to close this dangerous loophole before someone gets hurt.”