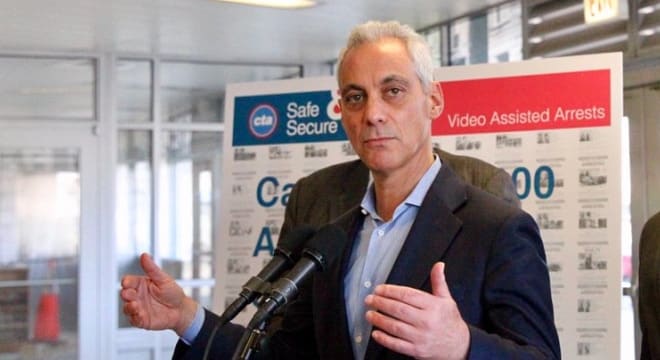 Chicago Mayor Rahm Emanuel wants gun shops licensed in a manner similar to barber shops, which it turns out is a complicated process. (Photo: Mayor’s office)

With Republican Gov. Bruce Rauner in a holding pattern on a scheme to add regulation to Illinois gun shops, Chicago Democrats are urging action.

Mayor Rahm Emanuel has been leaving letters in random places for Rauner in addition to issuing public statements pressuring the governor to enact a bill requiring state licensing for already federally licensed gun dealers. In a statement issued this week, Emanuel said that gun dealers should be held to the same standard as barbers in the state.

“Any Illinois business that wants to sell liquor or tobacco, eggs or wholesale aquatic life, or to cut and braid hair, must be licensed by the state. Why should gun dealers be any exception?” Emanuel said. “This isn’t difficult: if we can license barber shops, we can license gun dealers.”

While the Mayor’s reference to barbershop licensing on its face may seem humorous, it does play into the hand of those who argue adding a complex layer of additional state regulation to gun shops is designed to force some out of business.

The Illinois Department of Financial and Professional Regulation, responsible for barber licenses, maintains a labyrinthine system of required training, testing and certification for those who want to legally cut hair in the Land of Lincoln. Authorized by the Barber Act, candidates for a license have to first complete at least 1,500 hours of training at an accredited barber school, pay a $156 testing fee, and pass a written exam. Once approved for a license, for which there are additional fees on a varying schedule, barbers are required to continue their training and reapply for a renewal every five years.

The U.S. Bureau of Labor Statistics has pointed out that various state licensing guidelines for barbers exist in an absence of federal regulation and are often pushed by professional barber organizations. Further, courts have held hair lacks constitutional protection.

In contrast, federally licensed gun dealers are extensively regulated by a dedicated branch of the Department of Justice that maintains a force of over 800 specialized industry investigators focused on compliance.

The legislation pending with Rauner passed the Senate last April in a 30-21 vote and the House last week 64-52. It would mandate a $1,000 five-year state permitting process for FFLs in the state on top of federal requirements.