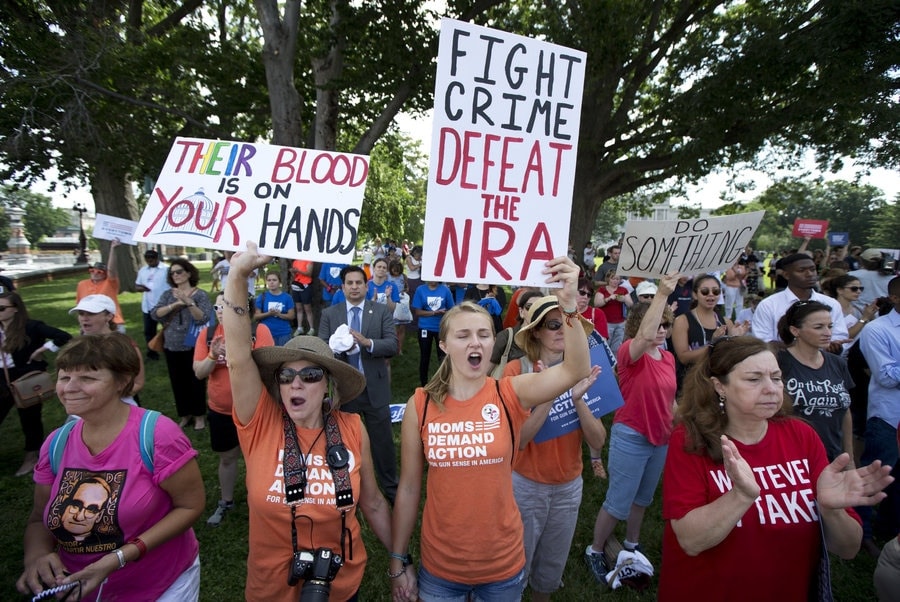 This rarely translates into more gun laws at the federal level, however. The shooting at Marjory Stoneman Douglas High School in Parkland, Florida last month even spurred a brand new policy proposal — banning rifle sales to anyone under age 21 — in a decades-old debate over the role of regulation in preventing gun-related violence.

But will this — or any of the other policy positions so widely touted as supported by the majority — turn into law? Probably not, according to pollster, political scientist and college professor Harry Wilson.

Wilson, a member of the National Rifle Association, teaches public affairs at Roanoke College in western Virginia and identifies three main reasons why opinion polls — with their sky-high rates of agreement among all demographics and partisan leanings — rarely align with federal gun policy.

“I have examined the issue from different perspectives,” he said in an editorial for The Conversation. “I have found that there are three major reasons that policy does not always follow public opinion: the structure of the U.S. government, the overlooked complexities of public opinion and the influence of voters and interest groups.”

Add in the use of filibusters, the House’s partisan-drawn congressional maps and the inability to amend the Constitution through any direct-voter initiative, such as a ballot referendum, Wilson said the load of stricter gun policy is just too heavy for lawmakers to bear.

“In a closely divided Senate, 60 votes are almost impossible to muster,” he said. “In addition, national sentiment is not mirrored in every state or congressional district.”

The sentiment, he said, may appear unified around more gun control — particularly when comparing poll results indicating greater than 90 percent of Americans favor “universal background checks” or three-quarters support an “assault weapons ban.” Except, he said, it’s rarely that straightforward.

“Simultaneously, most Americans think that additional gun control measures won’t reduce violent crime,” he said. “This is not surprising because most Americans don’t blame guns for these tragedies.”

The RAND Gun Policy Project in America said the country’s gun debate stems from a disagreement over the effects of gun policy — not the objectives of new proposals themselves. A lack of scientific research studying such outcomes means policymakers and the experts who advise them can’t even agree on facts about gun-related violence.

“Both groups prefer policies that they believe will reduce gun violence, but one believes that eliminating gun-free zones, for instance, will accomplish this objective, while the other believes that such a policy would have the opposite effect,” said Andrew Morral, a senior behavioral scientist at RAND Corporation, while discussing the organization’s survey of gun policy experts on both sides of the debate. “This is a disagreement about facts, not about values or objectives.”

Wilson said “legitimate legal constraints” also stand in the way of public opinion. “Crafting legislation that disqualifies those we all agree should not possess firearms but protects the rights of law-abiding citizens is quite difficult,” he said.

Finally, Wilson said, gun rights voters show up at the polls more often to elect candidates focused on preserving the Second Amendment. This, despite the frequent news coverage surrounding gun control efforts and the “erroneous impression” it leaves with casual viewers who may perceive the movement’s followers as “more passionate.”

“Gun owners are more likely than non-owners to vote based on the issue of gun control, to have contacted an elected official about gun rights, and to have contributed money to an organization that takes a position on gun control,” he said. “Such differing rates of political activity are to be expected because many gun owners fear their rights are or will be restricted, and that drives them to the polls.”

This fact, Wilson says, gives the NRA and its 5 million members what some would argue is too much influence in Washington. Elected officials want votes and the NRA provides them — a simple, albeit accurate reflection of the group’s lobbying power.

“Many factors influence how legislation is drafted, amended, enacted and implemented. Searching for a direct causal connection from public opinion to specific policies, including gun control, may be akin to a search for the holy grail,” he said. “Our elected officials care more about the opinions of those who vote for them than what the nation as a whole thinks. On most issues they represent the interests of the majority of voters in their districts – or they get voted out of office.”