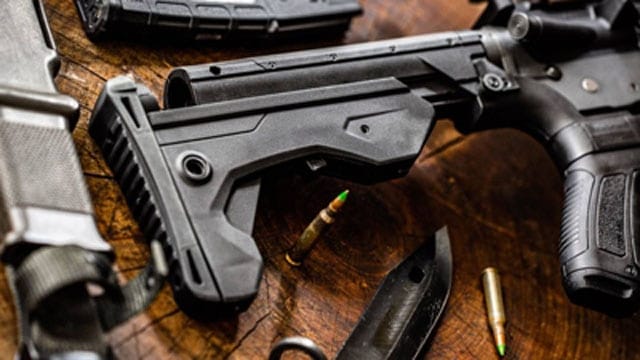 The Department of Justice announced Saturday a proposed regulation adding the devices to the definition of “machine gun” under both the National Firearms Act of 1934 and the Gun Control Act of 1968.

“President Trump is absolutely committed to ensuring the safety and security of every American and he has directed us to propose a regulation addressing bump stocks,” Attorney General Jeff Sessions said in a news release Saturday. “To that end, the Department of Justice has submitted to the Office of Management and Budget a notice of a proposed regulation to clarify that the National Firearms and Gun Control Act defines ‘machinegun’ to include bump stock type devices.”

The move comes less than a month after Trump publicly leaned on Sessions and the department to draft a regulation banning bump stocks — and soon. The accessory, which mimics automatic gun fire, gained notoriety in October after a lone gunman mowed down 58 people and wounded more than 850 others on the Las Vegas strip with a dozen rifles modified with the devices.

“You put it into the machine gun category, which is what it is. It becomes essentially a machine gun,” Trump said on Feb. 27. “It’s going to be very hard to get them.”

While the move will likely anger gun rights groups, Everytown for Gun Safety and Moms Demand Action released a joint statement hours after the DOJ announcement in favor of the proposed rule.

“We applaud the Department of Justice for taking this important step, and we hope a bump stocks rule gets approved quickly,” said John Feinblatt, president of Everytown. “However, this action alone is not enough to meet the moment. Across the country, Americans are demanding action on gun safety, states are delivering, and it’s time for Congress to follow suit.”

Bipartisan measures in both the House and the Senate to ban bump stocks sit without action. Senate Minority Leader Chuck Schumer agreed only lawmakers can “close the loophole” in a statement to CNN last month.

“There are serious problems with the President’s approach,” Schumer said. “First, his own ATF agency has warned that it does not have the authority to ban bump stocks. The only way to close this loophole permanently is legislation.””

Although bump stocks existed in relative obscurity prior to the Vegas shooting, the Bureau of Alcohol, Tobacco, Firearms and Explosives knows the devices well. In 2010, Texas-based bump stock manufacturer Slide Fire Solutions sought a determination from the agency regarding their product’s classification under federal law.

At the time, ATF deemed bump stocks as nothing more than an unregulated accessory — not a machine gun, or capable of converting a semi-automatic firearm into a fully automatic firearm, either. Rick Vasquez, the now retired agent who made the call eight years ago, stood by his decision in an Oct. 7 Facebook statement.

He responded briefly to the impending ban in an email to Guns.com last month. “The ATF has been directed to write a regulation that is stronger then the law,” he said. “An agency can write regulations, but only Congress can write laws.”