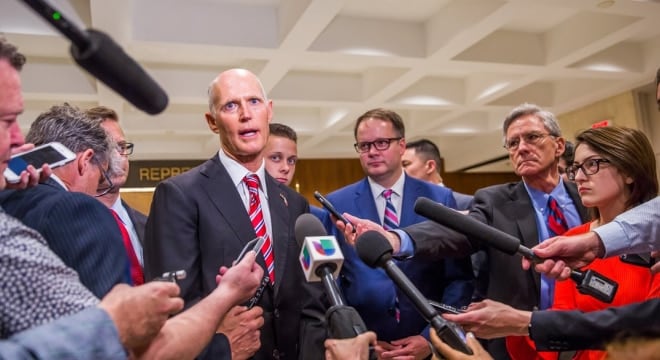 Florida’s Republican Gov. Rick Scott signed a sweeping school security and gun control plan into law Friday, and the state was promptly sued by the NRA over a facet to raise the minimum age for any gun to 21. (Photo: FL Governor’s office)

Just after Florida Gov. Rick Scott signed the measure, the gun rights group hit the state with a federal lawsuit over stripping gun rights of thousands of adults due to their age.

Scott applied his signature to SB 7026, the Marjory Stoneman Douglas High School Public Safety Act, on Friday, just three weeks after the high-profile shooting that claimed the lives of 17. The National Rifle Association responded the same day by filing a lawsuit in the U.S. Northern District of Florida, arguing the Constitutional rights of those over 18 and not yet 21 were being trampled by a tenet of the bill that raises the age to buy any gun in the state to 21.

“Florida’s ban is an affront to the Second Amendment, as it totally eviscerates the right of law-abiding adults between the ages of 18 and 21 to keep and bear arms,” said Chris Cox, executive director of the NRA’s lobbying arm. “The ban is particularly offensive with respect to young women, as women between the ages of 18 and 21 are much less likely to engage in violent crime than older members of the general population who are unaffected by the ban.”

The lawsuit, naming Florida Attorney General Pam Bondi and state police boss Rick Swearingen in their official capacity, argues that adult males at age 18 are considered part of the militia under federal law and may be conscripted for military service and, that by denying their right to keep and bear arms, the Sunshine State is violating both the Second Amendment as well as the equal protection allowed under the Fourteenth Amendment. As for females, the group argues Florida’s ban impacts them as well and points out that women in the affected age group pose only a slight risk of carrying out a “violent crime of any kind.”

While SB 7026 was Republican-sponsored, the GOP was far from united around it and 19 House Republicans cast their lot against the measure as it raced through Tallahassee. Away from the statehouse, other high-profile Republicans are worried about the legality of the age restriction.

“We wouldn’t say if you’re 18 to 20 you don’t have a 4th Amendment right and police can search your house without a warrant; We wouldn’t say they can seize your property without just compensation and the 5th Amendment doesn’t apply,” U.S. Rep. Ron DeSantis, R-Fla, said on Fox’s The Ingraham Angle. “So I think that provision is problematic.”

Rod Sullivan, a Jacksonville area former constitutional law professor, told local media the NRA’s case against the state has some merit and is likely to go on to the U.S. 11th Circuit and eventually the Supreme Court.

“It does come down to the Second Amendment. It’s a fundamental right. It’s not like the right to buy cigarettes or drink alcohol. This is a right that’s in the Constitution,” Sullivan said.

In addition to the age restriction, SB 7026 makes it a felony to possess a bump stock or similar device and mandates a three-day wait on most gun transfers with some exceptions. A “red flag” provision would allow police or the family of a person thought to be at risk to file to have the individual’s guns temporarily seized.

The new law also includes some $400 million in authorizations to increase school security, memorialize Florida’s worst school shooting, establish a commission to investigate the incident and create a $67 million “guardian” program of law-enforcement trained armed volunteer school faculty, the latter a move that many Democrats and gun control groups opposed.