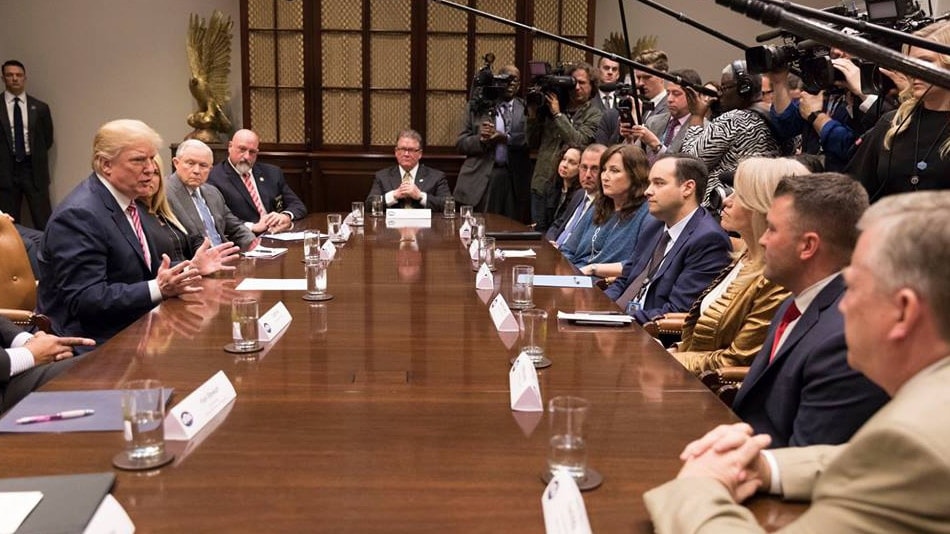 The White House opted to take cues from gun rights advocates in its proposal for preventing future school shootings with a plan that highlights arming teachers but excludes raising the age limit to buy long guns.

Despite President Trump repeatedly advocating raising the gun buying age from 18 to 21, the White House instead opted to have a panel explore it as an option rather than make it a key component.

“Highly trained expert teachers will be allowed to conceal carry, subject to State Law. Armed guards OK, deterrent!” Trump tweeted on Monday, adding “On 18 to 21 Age Limits, watching court cases and rulings before acting. States are making this decision. Things are moving rapidly on this, but not much political support (to put it mildly).”

During meetings on the subject of school safety, Trump said he was willing to buck the National Rifle Association to advance gun laws that would raise the age limit to buy guns and permit law enforcement to “take the guns first, go through due process second.” But after meeting with NRA officials, both parties released statements saying Trump supports the Second Amendment and due process but not gun control.

In response to the school shooting in Parkland, Florida, that left 17 people dead and 15 injured, state lawmakers passed a sweeping gun control bill that included upping the age limit to buy firearms. Immediately after the governor signed the bill into law, however, the NRA challenged it in federal court.

The White House’s plan, announced less than four weeks after the Valentine’s Day school attack, will immediately establish a federal commission to explore other options as well. Trump appointed secretary of education Betsy Devos to chair the Federal Commission on School Safety, which will recommend policy and funding proposals for school violence prevention, including plans to fund training for armed teachers.

The administration also said it wants to harden school security “just like our airports, stadiums, and government buildings,” strengthen the federal background check system, and reform mental health programs, according to a statement summarizing the plan.

For background checks, White House officials said the president will support the bipartisan FixNICS measure to incentivize state participation in the FBI’s National Instant Criminal Background Check System, which conducts checks on behalf of licensed gun stores before transferring a firearm to a customer.

During a meeting with lawmakers, Trump advocated the bipartisan FixNICS measure, introduced by Sens. John Cornyn, a Republican from Texas, and Chris Murphy, a Democrat from Connecticut, over another FixNICS measure tied to legislation that would permit concealed carry in all 50 states. Even though he supported it, the president described the latter measure as untenable in the current political climate.

Support for Trump’s plan varied. Without mentioning Trump or his plan, the NRA stumped for solutions that mirror details listed in it almost verbatim and also threw support behind “risk protection orders” to strip away guns from individuals who threaten violence or pose a danger to themselves or others.

“These proposals could be done right now. While they won’t solve everything, they will help lead to a broader discussion on how to address a culture of violence in America, which is desperately needed,” said Chris Cox, the NRA’s head lobbyist, in a recruitment video Monday. “We can take action and prevent violence and protect the Second Amendment rights of law abiding Americans at the same time,” he added.

The National Education Association, the largest representative of U.S. educators in the country, “overwhelmingly rejected” Trump’s idea to arm school staff. “Educators need to be focused on teaching our students. We need solutions that will keep guns out of the hands of those who want to use them to massacre innocent children and educators. Arming teachers does nothing to prevent that,” said Lily Eskelsen García, NEA president, in a statement. She added that resources should be directed toward providing “more books, art and music programs, nurses and school counselors” as opposed to guns.

Randi Weingarten, president of the American Federation of Teachers, a teacher’s union, called Trump’s plan to arm teachers “antithetical to the needs of children and ignores the purposes of public education.” She also panned Trump’s political allegiance to the NRA as well as his appointing DeVos to chair the panel to examine school safety plans.

The controversial DeVos gave an interview with 60 Minutes on Sunday night to discuss elements of Trump’s plan. In the interview, she appeared to know little about the department she was appointed to head and last week was criticized by shooting victims for an apparent indifference toward them. DeVos has been a source of contention because of her stance on privatizing schools over of supporting public education.

“Based on Betsy DeVos’ performance on ‘60 Minutes’ last night, and at Stoneman Douglas High School last week, it’s clear the secretary of education knows little if anything about how to ensure safe and welcoming schools, much less an appropriate environment for teaching and learning,” Weingarten said in a statement.

Gun control advocate John Feinblatt, president of Everytown for Gun Safety, criticized Trump for backing away from measures he had favored during televised meetings with lawmakers. “The White House plan is a complete failure of leadership. On gun safety, they shrug and pass the buck to the states. But when it comes to the NRA’s priorities, they’re happy to push for a federal mandate that guts state laws,” he said.