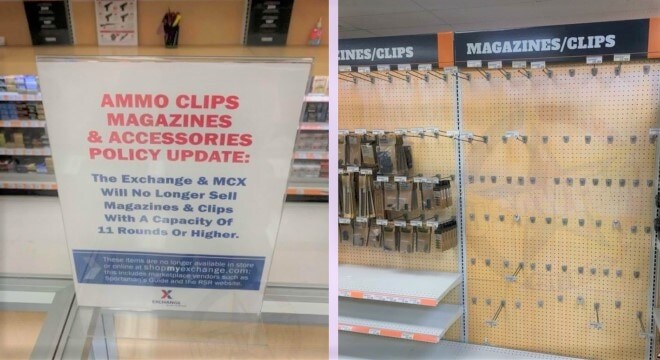 The Exchange briefly pulled magazines capable of holding more than 10 rounds, then backpedaled after the move was not welcomed by its customers (Photos: US Army WTF Moments)

The Army and Air Force Exchange Service halted sales of the magazines earlier this month but, the giant retailer reversed course on the self-imposed ban following customer protests, The Military Times reported.

“Feedback from active-duty, Guard and Reserve soldiers and airmen highlighted the criticality of high-capacity magazines as it relates to readiness and proficiency,” Exchange officials said.

The decision to stop selling the magazines, often original equipment, created sharp feedback on the retailer’s social media and was featured on military-oriented blogs that specialize in highlighting morale-busting gaffes by the services. Some in uniform noted they purchased magazines used later in training and deployments.

AAFES and its sister MCX and CGX outlets cater to servicemen, their families and veterans across more than 3,100 outlets on and near military installations around the globe.