President Reagan's Flintlock Rifle is Once Again in the NRA Museum 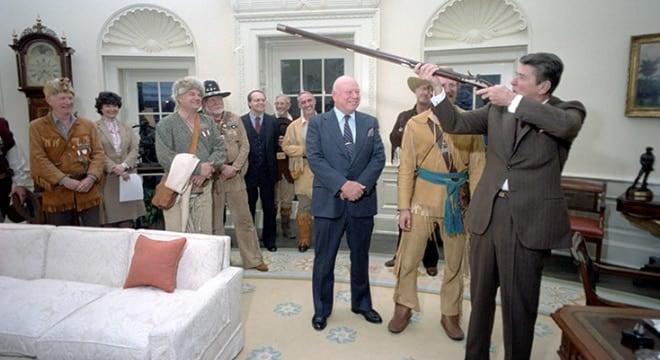 Dec. 7, 1981: Next to the President in a suit is then-NRA Executive Vice President Harlon Carter while gunsmith Christopher Hirsch is in buckskins slightly obscured by the rifle. In the background is a young Wayne LaPierre, at the time a state liaison for the NRA’s newly formed Institute of Legislative Action (Photo:Reaganlibrary.gov)

The first presidential candidate endorsed by the group, the NRA was there when “The Gipper” was presented with a flintlock in 1981 and the Second Amendment group now has the gun on display once again.

The replica Kentucky rifle was crafted by Texas gunsmith Christopher Hirsch for the 40th President and given to him in the Oval Office on Dec. 7, 1981. Reagan asked that the gun be displayed at the NRA museum in nearby Virginia and it was for two decades before it was transferred to the Ronald Reagan Presidential Library & Museum in Simi Valley, California, but it has returned “home” on loan and is now back on display in Fairfax.

The NRA Museums said: “Sporting a 42-inch barrel, the rifle was made like all traditional Kentucky longrifles — for a right-handed shooter. However, Reagan was left-handed. Hirsch was surprised by this, but Reagan laughed it off and assured him that he has been shooting right-handed for many years.”

The former President noted in his diary that day about the muzzleloader that, “It’s one of the most beautiful pieces of work I’ve ever seen.”

Reagan brought up the flintlock in 1983 when he appeared at the NRA’s 112th Annual Meeting in Arizona and addressed a crowd of “thousands” belonging the group, then ranked at 2.5 million strong nationwide.

Not too long ago, I had a very memorable visit from your officials. They walked into the Oval Office with some members of the “F” troop of the Texas army. Now, when I saw how those fellows were dressed, and what they were packing, I didn’t know whether to stretch out my hand, or make a run for it through the Rose Garden. [Laughter] Well, it turned out they wanted to induct me into the Texas army and to give me a beautiful, hand-crafted flintlock rifle. And I thank you for taking such good care of it, because it’s in your museum now.

The President, who survived an assassination attempt that left him with a bullet in his chest [“Getting shot hurts“] and afterwards wore an “iron undershirt” when going sketchy places such as the UN, had an extensive firearm collection and noted at least one foggy Friday morning spent during his term in office performing maintenance on his guns [“I have 14 rifles & almost as many handguns & they were all in need of oiling & cleaning.].

Of course, Reagan enacted the Mulford Act in California in 1967 and the Hughes Amendment in 1986, but hey, if Mondale would have won in 1984, he advocated banning handguns with barrels less than 3-inches among other restrictions.