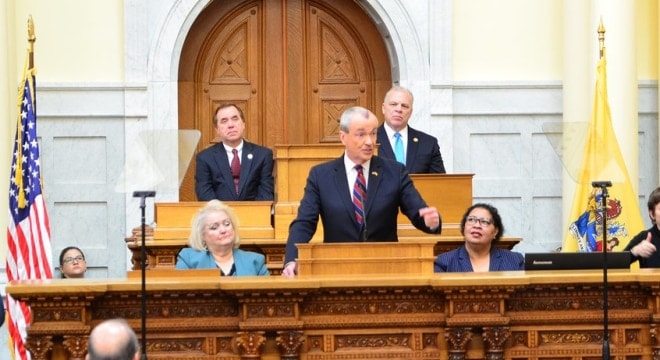 Gov. Phil Murphy’s first budget, announced this week, includes $1.6 billion in tax increases, some of which are aimed at those looking to buy guns. (Photo: Gov. Murphy’s Office)

New Jersey Gov. Phil Murphy’s first budget would see a big hike in taxes to pay for social programs and developments — some funded by gun owners.

In announcing his budget this week to lawmakers, the newly installed Democrat pledged to be a different type of governor before he worked in details of $1.6 billion in new taxes to jump start everything from tuition-free community colleges to mass transit improvements. Murphy, who ran on a platform that included promising to sign every gun control bill that Republican Chris Christie ever vetoed, also worked gun politics into his address.

“The day before Parkland, I attended a roundtable on gun violence in Cherry Hill with Majority Leader (Lou) Greenwald,” said Murphy, in reference to an event that included only gun control advocates and none from Second Amendment groups. “Lou, I look forward to working with you, and with everyone in this chamber, to pass and enact long-overdue gun safety bills – including “red flag” legislation, reducing magazine ammunition capacity, and requiring background checks for private gun sales.”

Included in Murphy’s proposed budget is a $2 million outlay that will establish the Center on Gun Violence Research “to provide deeply needed research on this public health problem.” The concept, putting gun accidents, crime and suicides under a tax payer-funded microscope as a health care crisis, has been advanced in the legislature several times with gun rights groups painting such a move as an “attempt to create an anti-gun think tank cloaked in the legitimacy of academia.

The Giffords organization welcomed the news of the proposed research center funding. “The epidemic of gun violence is a major public health problem that continues to impact the lives of Garden State families and communities,” said Nico Bocour, the state’s legislative director for Giffords. “Governor Murphy recognizes that there is more that New Jersey can do to continue to be a leader in finding and funding life-saving solutions to gun violence.

Also of interest to gun owners is a proposed tax on firearm sales, which Murphy’s budget forecasts to bring an additional $6.6 million to the state’s coffers. Upping the sales tax on guns was touted by Murphy on the campaign trail last summer as an answer to gun violence. In addition to the targeted tax on guns themselves, all New Jerseyans would see a jump in retail sales tax across the board, proposed to increase from the current 6.625 percent to 7 percent. The Democrat said it was a mistake to drop from that level in past years.

“Let’s be honest, the impact of the three-eighths of one percent sales tax decrease has been nearly imperceptible to the average family, but has directly impacted our ability to provide better services to, and greater future investment in, that family,” Murphy said.