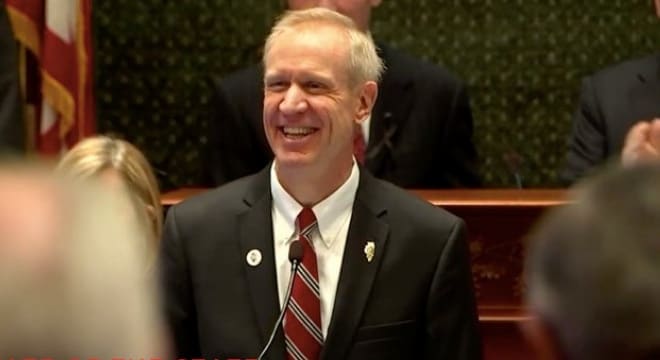 Democrats in the legislature are spooling up to attempt an override of Republican Gov. Bruce Rauner’s veto of a bill that would add state scrutiny to federally licensed Illinois gun dealers.

Rauner rejected the measure Tuesday in its entirety, saying SB 1657 was redundant and would establish “a largely duplicative state level of licensing and regulation” to the already existing federal oversight on legal gun dealers without improving public safety. The Governor, who has been pressured by Chicago lawmakers and Mayor Rahm Emanuel to sign the bill, shook his head to the notion that adding more regulation to gun shops would take weapons off the Windy City’s streets.

“The core issue is not which guns to legally ban or regulate,” Rauner said in his veto letter to legislators. “We have ample proof that such narrowly focused legislative responses make for good political cover, but they do little to stop the illegal flow of guns into Illinois or prevent people from committing thousands of crimes in our state each year with illegal guns.”

Emanuel on Tuesday held a press conference with city leaders and gun control advocates in tow to denounce Rauner’s rebuff of the proposal, chalking the move up to an upcoming party primary.

In Springfield, where the General Assembly is in session and voting on a sheaf of gun control legislation this week, work is already underway on a veto override attempt which would require a three-fifths vote and need to pick up more supporters than the bill garnered when it passed initially and in a more compressed window. With many of his fellow Republicans against the proposal, the licensing act took over a year to reach the governor’s hands, passing the Senate last April in a 30-21 vote and the House earlier this month, 64-52. Illinois-based gun makers, as well as state and national gun rights groups are all working to short-circuit such a move.

Meanwhile, Rauner has offered Democrats an figurative olive branch by urging action on taking guns out of the hands of criminals and the mentally ill in the shape of a proposed Legislative Public Safety Group. while continuing to publicly support a ban on bump stocks.