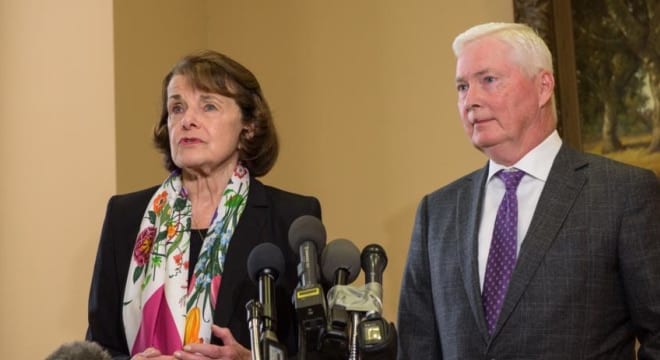 The former San Francisco mayor and author of the long-expired federal assault weapon ban visited with Stack in the aftermath of the big box retailer’s adoption of a controversial policy banning gun sales to those under age 21 across their 700 locations nationwide, including 26 Field & Stream stores.

“I was delighted to meet Ed Stack, who I think is a great American,” Feinstein said. “He’s a supporter of the Second Amendment and a gun owner, but also understands that we need reasonable controls on who can buy guns and what guns they can buy.”

In addition to barring sales to adults under 21 — which has drawn at least two lawsuits and driven some employees away in protest– Stack solidified an earlier decision to stock modern sporting rifles such as AR-15s and magazines capable of holding more than 10 rounds.

“We’ve promised that we’ll never put the assault-style weapon back in the Field and Stream stores or the Dick’s stores,” said Stack after his meeting with the California Democrat, before advocating to “fix” background checks and bring back one of Feinstein’s favored proposals.

“We feel that we should have high-capacity magazines banned,” Stack said.

Dick’s predicts this year could see a decrease in store sales as a result of the company’s new firearm policies.