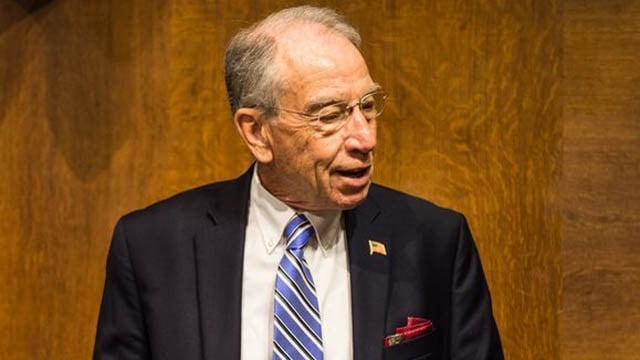 Sen. Chuck Grassley, R-Iowa, waits for the start of the nomination hearing for Christopher Wray as Director of the FBI on July 12, 2017 in Washington. (Photo: Mary Mathis/USA TODAY)

As such, the forthcoming bill — entitled the Marjory Stoneman Douglas High School Memorial Act of 2018 — provides additional funding to the Secret Service’s National Threat Assessment Center as it continues its groundbreaking research into school violence prevention.

“This bill will enable the National Threat Assessment Center to share its proven techniques and research with more of our nation’s school systems,” Grassley said. “It is a fitting memorial to the victims and survivors of the Parkland attack, and will help prevent future violence.”

Grassley informally introduced the bill during a Senate Judiciary Committee hearing Wednesday regarding the systemic law enforcement failures that unfolded in the months before 19-year-old Nikolas Cruz gunned down 17 people at his former high school last month.

The Federal Bureau of Investigation, the Broward County Sherrif’s Department and the Florida Department of Children and Families all received information about Cruz’s mental instability and homicidal tendencies in the months leading up to the Valentine’s Day attack, but failed to act.

Only the FBI, however, showed up at Wednesday’s hearing to discuss the issue further. “As the FBI Director has made clear, the FBI could have and should have done more to investigate the information it was provided prior to the shooting,” said David Bowdich, deputy director of the FBI. “While we will never know if any such investigative activity would have prevented this tragedy, we clearly should have done more.”

“I’ve seen the Sheriff all over television discussing the shooting, so it is disappointing the he has refused to speak before Congress,” Grassley said, noting Carroll clearly “dropped the ball” too. “By thumbing their noses at Congress, Sheriff Israel and Secretary Carroll have let the American people down and also the citizens of Florida they serve.”

State lawmakers have called on Florida Gov. Rick Scott to remove Israel for “neglect of duty and incompetence.” Scott opened an investigation through the Florida Department of Law Enforcement instead.

Israel maintains none of the nearly two dozen calls his office received about Cruz ever amounted to an arrestable offense. He accused lawmakers of engaging in “disingenuous political grandstanding” for the sake of a few headlines.