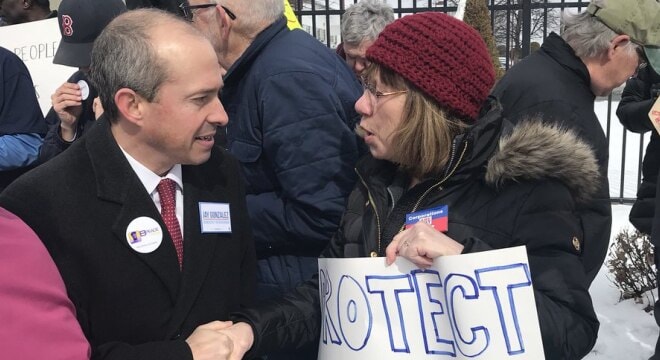 Jay Gonzalez, a Democrat looking to become the Commonwealth’s next governor, wants to end the production of “assault weapons” in Massachusetts (Photo: Jay4Ma.com)

Jay Gonzalez, a former state Secretary of Administration and Finance now running for governor, said Wednesday that guns largely banned in the state already shouldn’t be made in the state either.

Gonzalez made his announcement on his way to a protest by students and gun control advocates across the street from gun manufacturer Smith & Wesson’s headquarters in Springfield.

Among the group’s demands to Smith & Wesson was that the company halt production of the M&P-15, the type of rifle used in a recent school shooting in Parkland, Florida.

“Weapons that cannot be legally purchased in Massachusetts should not be manufactured in our state,” Gonzalez said. “We’ve got to finally say enough is enough. The gun used in Parkland was manufactured by Smith & Wesson. If we had a law in place banning that from happening, that gun never would have ended up in the hands of that young man.”

Although Massachusetts enacted an assault weapon ban in 1998, the iconic gun maker has been headquartered in the state since the 19th Century and continues to make various models for the larger market that are unavailable inside the Commonwealth due to the regulations. According to data from federal regulators, Smith & Wesson manufactured 1.4 million pistols, 396,710 rifles, and 294,680 revolvers as well as a smaller number of miscellaneous firearms and shotguns in Springfield in 2016.

Smith & Wesson, with some 1,700 employees, has been lauded by industrial trade groups in Massachusetts for their contributions to the state economy and a “rich legacy of supporting philanthropic efforts in the community throughout the decades,” to include creating manufacturing technology application programs seen as a model for the rest of the commonwealth and leading efforts to go green through the use of solar energy.

Other high-profile gun builders with smaller operations in Massachusetts include Savage Arms, Troy Industries and Yankee Hill Machine, the latter founded in the state.

Gonzalez, heading into a Democratic primary in September, has made gun politics a key leg of his platform. Listed among the measures he supports is advancement in “smart gun” technologies, continued opposition to the legalization of suppressors in the state and growing the number of gun buybacks. He also supports state Attorney General Martha Healey’s controversial expanded enforcement of the state assault weapons ban, including “copycat” assault weapons.

On my way to support the students. The manufacture of assault weapons should be illegal in Massachusetts. #MAPoli https://t.co/7BDQLzCygr