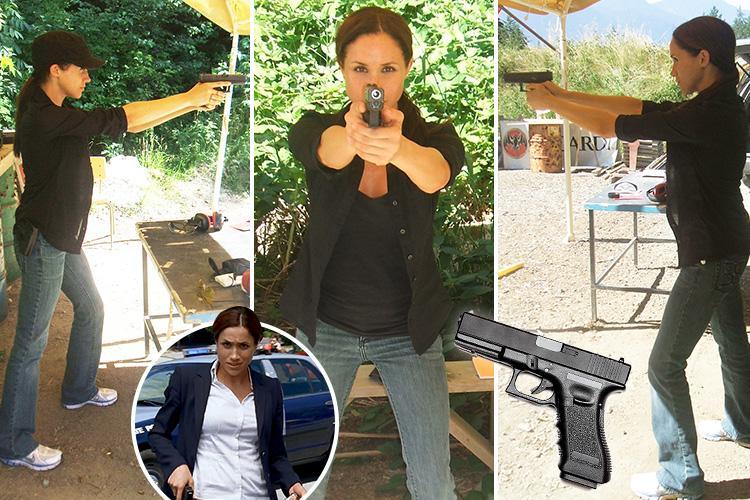 The Sun recently fell into some images of former actress Meghan Markle with a Glock in 2009 (Photos: The Sun)

The British scandal sheets loved images of the California-born royal-to-be posing with a “powerful” Glock.

“Meg my day,” says The Sun in their coverage of Markle, 36, posed with a Glock 17 at a gun club in Canada. The shots, reportedly from 2009 when she was in the midst of an acting career, show Prince Harry’s fiancée from three different angles with the Austrian polymer pistol. While she does exhibit good trigger discipline, she pulls a range safety no-no by going without eye and ear pro.

The Sun spoke to someone familiar with the event who gushed, “The Royal Family really is getting an all-action ­princess. She’s incredibly well-trained and prepared – just like her ex-Army husband,” in a nod to Harry’s service in Afghanistan in two abbreviated tours.

Fellow tabloids The Mirror and The Express picked up the story and embellished it, even using the word “GUN” in all capitals in the headline. The Daily Star echoed the report but used it as a segue into 30 borderline NSFW pics of Markle’s career.

Markle, a Northwestern graduate, portrayed an FBI agent on Fringe and a police officer in CSI: Miami, giving her the distinction of being one of the few royals with their own IMFDB pages. Her views on gun control, however, are pretty Bloombergian and she reportedly frowns on the royal hunting tradition.

Meanwhile, Markle’s soon-to-be gram, Queen Elizabeth, served in World War II to one degree or another and has been known to get behind a number of British Army small arms from time to time.

QE2 shown with an accurized Enfield .303 in the 1950s alongside possibly the most well-dressed spotter available, as well as firing a British L85 (SA80) rifle in Surrey, England in 2015.