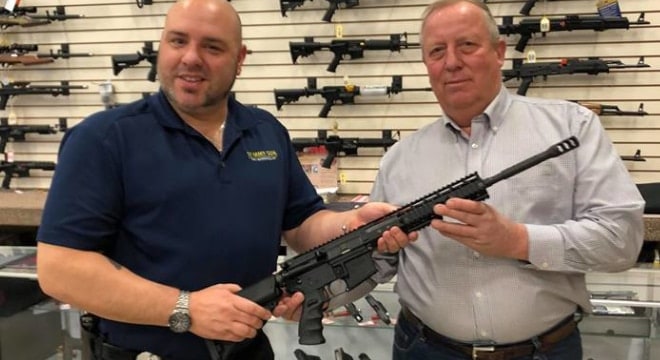 The company, known primarily for its line of compact handguns, has been quietly selling their initial Thompson-branded AR-15s from their Tommy Gun Warehouse outlet in Pennsylvania.

The Kahr Firearms Group — an organization that includes not only the eponymous handgun firm but also Auto-Ordnance, Magnum Research, and Thompson — is headquartered in Greeley, Pennsylvania and reportedly sold their first Thompson AR to a local police chief last December.

Justin Moon, Kahr’s founder and CEO, told The Philadelphia Inquirer recently that he’d like to put one of the iconic guns in every home. “I mean, every American should really have an AR,” he said. “It’s America’s rifle.”

Moon set up his current location in Greeley in 2014 after New York Gov. Andrew Cuomo enacted new limits and bans on guns labeled as “assault weapons” in the Empire State. Pennsylvania’s then-Lt. Gov. Jim Cawley was on hand to welcome the company with open arms as Kahr moved into a 600-acre business park in the area. Since then, the company’s co-located Tommy Gun Warehouse outlet has opened — an event that and saw local lawmakers as well Eric Trump drop in. Moon’s brother runs the nearby church that includes the possession of an AR-15 or similar rifle as a symbolic “rod of iron.”

Moon told the Inquirer he plans to start upping his local AR production, with a target price of under $700. “I’m going to make a standard AR-15 with my brand on it,” he said. “The AR-15 is the most popular rifle in America. It’s the most common rifle in America.”

Guns.com has reached out to the Kahr Firearms Group for additional information.