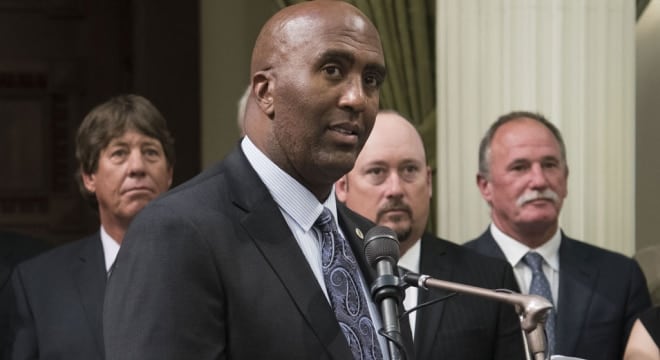 A California lawmaker intends to gut and amend a bill on agriculture to apply an additional tax on firearms and ammunition to fund school programs.

The measure, AB 2497, was introduced last month as a minor tweak to California’s Agriculture Day but moving forward will morph into a proposal that would provide counselors and armed officers to schools. The funding for the initiative would come from an as yet to be determined tax rate on gun and ammo sales.

“Because of budget cuts, a lot of schools don’t have counselors,” said the bill’s sponsor, Assemblymember Jim Cooper, D-Elk Grove, referencing the need to spot youth with issues that could escalate to violence. “This is a way to fund counselors and really identify these kids.”

Cooper says he hasn’t determined the tax rate in his proposal, but guns are already subject to a number of fees and taxes in the state. At the federal level, gun makers pay an 11 percent excise tax on guns and ammo to fund Pittman-Robertson Act requirements that go to pay for conservation programs.

In addition, a California retail sales tax of 7.25 percent is applied along with a special $25 DROS fee that goes to fund firearms warning labels and the state’s controversial gun seizure program. The California State Board of Equalization mandates taxes to be paid on guns sent to dealers from out-of-state retailers as well. The state also recently established controls on ammo sales which require licensing and a fee schedule of its own,  a program that has gotten off to a rocky start.

Second Amendment groups point out state lawmakers are working to up taxes and fees on gun owners while at the same time looking to cut taxes on marijuana growers and users. Further, they argue the tax unfairly burdens the state’s 13 million gun owners.

“We are going to single out a particular group of law-abiding citizens, and we are going to require them to shoulder the burden that quite frankly all of us as taxpayers need to be meeting,” said Craig DeLuz, a spokesman with the Firearms Policy Coalition.