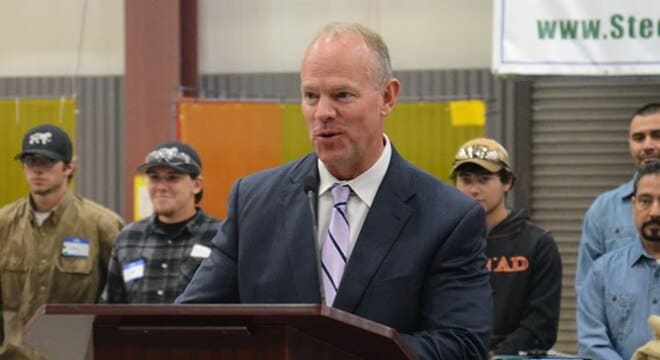 Wyoming’s Republican Gov. Matt Mead decided not to veto a pending Stand Your Ground bill, but rather to allow the measure to become law without his signature. (Photo: Wyoming Governor’s office)

Republican Gov. Matt Mead chose not to veto a measure expanding protections in cases where defensive force may be used and allowed the bill to become law without his signature.

Mead, a former federal prosecutor who has stumped to bring gun industry to the state, stood aside on HB 168, a popular bill that widens areas where no duty to retreat exists and provides immunity from civil liability in aftermath of a reasonable use of force. While the proposal’s sponsor welcomed the move, Mead said in a statement he did not feel the change was needed.

“I believe existing law adequately addresses the concerns raised in the Stand Your Ground Bill,” Mead told as the Wyoming Tribune Eagle.

The measure makes a number of changes to Wyoming’s justifiable use of force and self-defense laws, clarifying that a person attacked in a place they have a right to be has no duty to retreat before they use defensive force. In the event that force leads to a civil lawsuit, the person sued can seek a pre-trial hearing to decide if reasonable force was used, which would result in blocking the suit.

The measure passed the Senate 26-4 and the House 49-11 with the strong support of gun rights advocates to include the National Rifle Association.

Gun control advocates went so far as to take out full-page ads in area newspapers urging the governor to scuttle the bill. “This law only stands to make our state less safe as similar laws in other states have encouraged armed vigilantism and are associated with increases in homicide,” argued Beth Howard with the Wyoming chapter of Moms Demand Action in a statement.

The bill becomes effective July 1, at which point Wyoming will join at least 23 other states that have enshrined Stand Your Ground doctrine into law since 2005.

Mead has been actively courting gun makers to relocate to Wyoming, with Weatherby announcing earlier this year they were joining the ranks of Magpul, Thunder Beast Arms, and Best of the West who are already in the state.