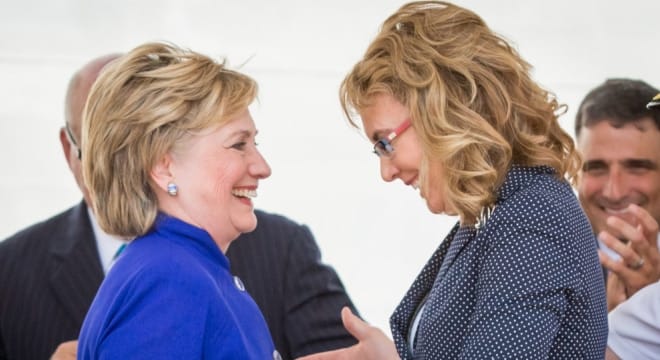 National gun control organizations still use the former presidential candidate and secretary of state to garner attention for events and fundraisers.

Hillary Clinton, who received the quick public endorsement from both Everytown and Giffords during her failed 2016 bid for the White House, still weighs in on gun politics and is feted by the groups.

“I have always believed in our power to make change if we come together and demand it,” said Clinton. “I hope you’ve been as inspired by these students as I have — now, more than ever, is the time to speak out.”

Clinton, who ran on a platform that often embraced gun politics, has been vocal on social media in recent weeks praising the student-led activists who catapulted to the national scene after a mass shooting at Marjory Stoneman Douglas High School in Parkland, Florida. In one tweet, she placed MSD  senior Emma Gonzalez in the same category as Giffords and Moms Demand Action founder Shannon Watts.

To all the students across our country who took part in #NationalWalkoutDay: Never let anybody tell you your voices don’t make a difference. You‘re an inspiration to millions of Americans who know commonsense gun reform is long overdue. We are with you, and we will not give up.

@Emma4Change @ShannonRWatts @GabbyGiffords and so many others, whose righteous voices have pushed us to see possibility and a path forward on gun violence prevention. pic.twitter.com/kg0ga9HJy3

For her continued efforts for gun control, the Giffords Law Center plans to bestow their 2018 Courageous Leadership Award to Clinton at a black-tie fundraiser to be held in San Francisco this summer. The dinner features opportunities at sponsorship ranging from $1,000 to $50,000.