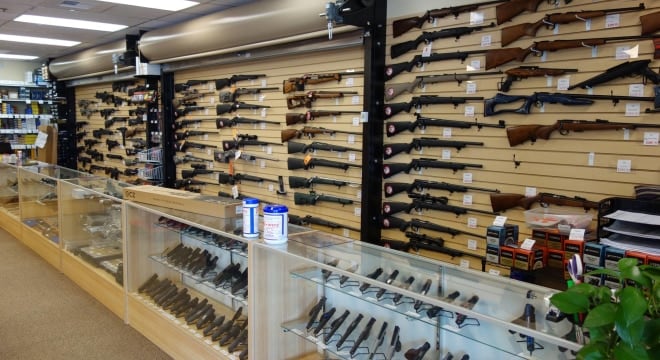 The counter at Precise Shooter, a sporting goods store in Lynnwood, Washington that recently moved from Seattle to escape that city’s gun tax. The store says they paid thousands in retail sales tax to Lynnwood instead. (Photo: Precise Shooter)

A controversial tax on guns and ammo enacted by Washington’s largest city is not the cash cow city leaders hoped and some argue in the end it is actually costing the city money.

The 2015 measure, which placed a $25 assessment on each modern firearm and up to 5 cents on each round of ammunition sold by retailers in the city, was billed as Seattle’s solution to the $17 million in medical costs from gunshot victims at the city-underwritten Harborview Medical Center in 2014.

However, as disclosed by figures released by the city under a Public Records Act request by TheGunMag.com’s Dave Workman, the amount collected totaled $93,220 in 2017 was far less than the $300,000 to $500,000 annual windfall projected by the city council three years ago.

“Once again, Seattle’s pie-in-the-sky gun tax revenue forecast has been proven to be a complete failure, essentially like other gun control fantasies,” said Second Amendment Foundation founder Alan Gottlieb in a statement. “The revenue data only reinforces our claim in a lawsuit against the tax that this was a gun control scheme to drive firearm sales and gun stores out of the city, which it obviously did.”

Gun rights groups, involved in a running legal battle with the city over the tax, have long painted the initiative as a failure, pointing out the number of shootings in the city are on the rise while revenues collected have consistently fallen short of the city’s expectations.

Some area firearms retailers are quick to agree with Gottlieb’s assessment. Precise Shooter, a former Seattle gun shop that relocated to nearby Lynnwood, argues the city went so far as to draw a net loss from the tax as shops moved from the city and in the process took their robust sales tax revenues with them. The store said they sold over 1,200 guns last year to Seattle residents who visited their location and that sales tax remained outside the Emerald City.

“Well, we don’t know how much of the revenue city lost at other gun stores, but we have transferred $63,715.36 in taxes to Lynnwood in 2017,” store staff pointed out. “If we did not have to move, this money would have gone to City of Seattle.”