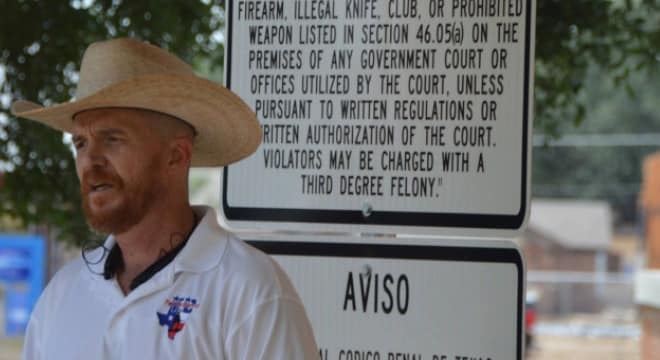 A Texas appeals court delivered a victory to Terry Holcomb in his fight against Waller County Courthouse’s gun free zone, while a challenge from the Texas Attorney General is still pending. (Photo: Valentine Gonzalez/Open Carry Texas)

An appeals court found last week that county officials didn’t have jurisdiction to sue a citizen who complained they had an unlawful gun free zone in their government building.

The 1st Texas Court of Appeals ruled that Waller County District Attorney Elton Mathis erred when he filed a lawsuit against a local open carry advocate who had penned a letter to county officials asking that they comply with state law and get rid of a gun free zone. Mathis had taken the unusual step of suing Terry Holcomb, executive director of Texas Carry, who initially raised awareness of the issue, leaving the activist on the hook for as much as $100,000 triggering the intervention on Holcomb’s behalf of Texas Attorney General Ken Paxton.

In this week’s ruling, the appeals court found Holcomb had a constitutional right to send the letter without fear of a retaliatory lawsuit.

Justice Harvey G. Brown, writing for the unanimous four-judge panel, said that Waller County’s beef was with Paxton, and not the concerned gun owner, saying, “Holcomb is not a proper party to any lawsuit concerning the County’s disagreement with the Attorney General.” As such, he overturned a lower court’s 2016 ruling in the case and remanded the issue to the lower court for the purpose of “awarding Holcomb his court costs, reasonable attorney’s fees, other expenses incurred.”

Holcomb welcomed the news of the case’s outcome and argued the matter had moved on from courthouse signage to one of a citizen’s right to participate in government without fear of retribution.

“We cannot express enough how pleased we are that the Court agreed with us,” said Holcomb in a statement. “The lawless actions of Waller County simply could not stand.”

For Paxton, whose office is handling the complaint against Waller County moving forward, called the ruling a “great day” for the First Amendment.

“Waller County should be embarrassed and ashamed of using litigation as a tool to silence someone who merely called on it to stop violating a state law,” said Paxton.