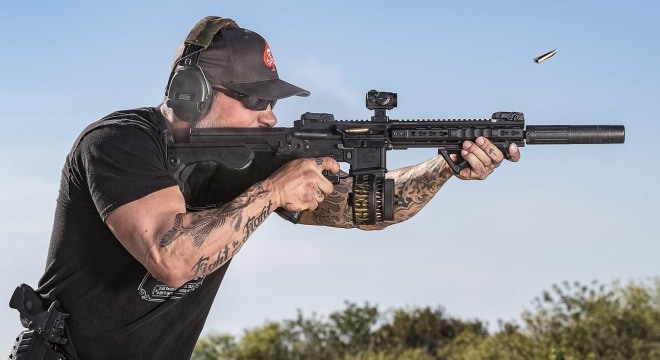 Bump stocks are set to become illegal in Florida come October, and a group of device owners is suing the state over the looming ban (Photo: Slide Fire)

The state of Florida has been hit with another legal challenge to a recently passed gun control measure, this time on the grounds of taking property without compensation.

A lawsuit was filed in Leon County circuit court by five owners of the banned devices — Justin Brashear, Jonathan Hunt, Christopher Mays, Joseph Truex and Clayton Woolfe — and seeks class-action status on behalf of Floridians subject to the looming ban on the accessories, the Palm Beach Post reported.

The litigation tackles just one of the facets of SB 7026, signed into law by Gov. Rick Scott on March 9. The sweeping measure not only bans the possession, use and sale of bump stocks under threat of a felony, it also expands background check waiting periods on gun transfers and ups the age to buy any firearm in the state to 21 — the latter already the focus of a suit brought by the National Rifle Association.

With the bump stock ban, attorneys for the plaintiffs argue the state is moving to deprive currently lawful owners of their devices as the rushed legislation had no allowance for “buy backs,” grandfathering, or a path to legal ownership of existing stocks and triggers.

“If the government is going to ban these devices then they should compensate the people that legally purchased them,” said Andrew Kagan, one of the attorneys representing the stock and trigger owners. “As soon as the government starts to take people’s property without compensating it, there’s a big problem in that.”

The Bradenton area Republican who sponsored the legislation, state Sen. Bill Galvano, told The News Service of Florida on Tuesday that he had “made a cursory review of the suit” and continues to support the ban, which is set to become effective Oct. 1.

Similar prohibitions enacted in Massachusetts or New Jersey likewise have no grandfather clause and instruct owners of the outlawed devices to turn them in without compensation under penalty of law while one signed two weeks ago in Washington authorizes state police to purchase bump stocks from owners until July 1, 2019, at a price of $150.