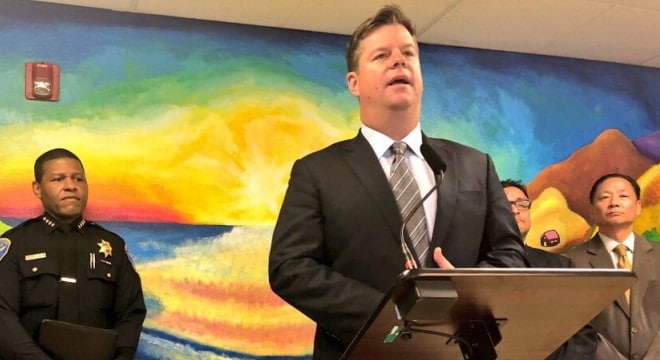 The $800,000 initiative, approved by the City, would expand efforts to confiscate guns from those who are prohibited from owning firearms due to felony or violent misdemeanor convictions. Among the outlays funded will be for five new positions in San Francisco’s Adult Probation Department, tasked with following up with those who have recently lost their gun rights to make sure their firearms are removed.

“When we keep weapons out of the hands of felons, we make our communities safer for all San Franciscans,” said Farrell in a statement. “We cannot allow these criminals to continue to have access to weapons. Gun violence is a tragic epidemic in our city, state, and country, but we are taking meaningful steps in San Francisco to remove firearms from the most dangerous individuals in our society.”

Farrell, who has been a longstanding proponent of gun control in a city with no legal gun stores, says that Proposition 63, approved in 2016, upped the number of firearm confiscation cases the city saw by 60 percent. This, in turn, triggered the need to increase manpower in the city’s probation enforcement arm. San Francisco’s efforts are in addition to California’s controversial APPS program — the only one of its kind– that collects registered firearms in the state from those no longer eligible to possess them.

The San Francisco Examiner recently reported that the city’s government was an estimated $10 billion in the hole due to deficit spending, health and pension care liabilities. Meanwhile, Farrell’s administration is under fire from the NAACP, who says the Board of Supervisors met illegally to install the former supervisor as mayor.