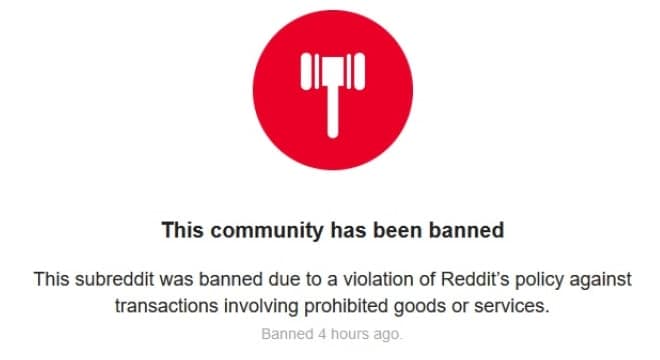 Many Redditors went to their favorite gun community board Wednesday only to find that it had been banned.

The social news discussion platform ranked among the most visited websites in the world announced a content policy Wednesday that left many popular gun boards banned.

The San Francisco-based site, which is structured around user-created boards termed “subreddits,” updated their community guidelines to bar the use of Reddit “to solicit or facilitate any transaction or gift” that involves a host of items ranging from firearms to drugs, sex work, and stolen goods.

“Reddit is not intended to be used as a marketplace and takes no responsibility for any transactions individual users might decide to undertake in spite of this,” said the company in a posting that saw nearly 3,000 comments, overwhelmingly negative to the change.

Popular subreddits trading ammunition brass, giving tips for good deals on guns for sale by shops and wholesalers and even airsoft trading boards were turned off.

Among the comments were users defending /r/Gundeals as a distributor and manufacturer coupon subreddit where no gun sales took place.

“It’s ridiculous that you’re lumping gundeals in with other subs that facilitated illegal activities,” said one poster. “Gundeals at no time ever violated or attempted to skirt any laws; everything was 100% in compliance with federal and local laws as /r/gundeals was simply just a springboard for coupons and deal alerts and all transactions took place off Reddit through the proper and licensed channels.”

Some pointed out that ad scans or other discussions about sales for big box sporting goods retailers like Cabela’s, Dicks, and Walmart were still widely posted across Reddit.

Another asked, “So why lump Firearms in with drugs, prostitution, theft, and falsifying documents? Last I checked, guns were still legal in the U.S.”

The move comes as Bumble, YouTube and others have become hyper aware to the optics of anything gun-related on their expansive social platforms in the wake of the Marjory Stoneman Douglas High School shooting that left 17 dead and 15 injured in Parkland, Florida.