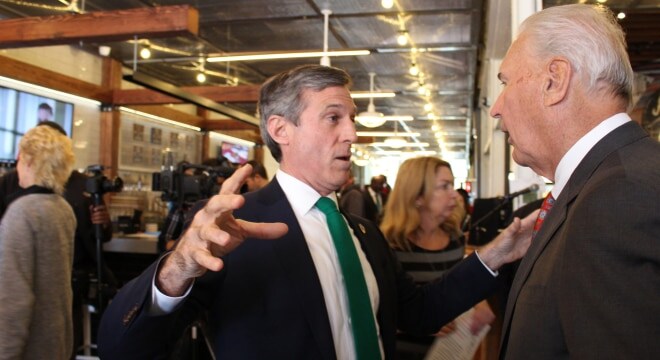 Gov. John Carney, shown here at the opening of a brewery on March 16, wants to trim the numbers of “weapons designed for the battlefield” from Delaware. (Photo: Governor’s office)

The measure, SB 163, aims to ban new sales of a number of guns by name and type as well as place restrictions on the use of those currently in circulation. The architects of the bill say it is needed to cull “weapons designed for the battlefield” from Delaware.

“As we have seen in Parkland, Las Vegas and in many other horrific tragedies across our country, military-style weapons can be used to carry out catastrophic acts of violence,” said Carney in a statement. “These weapons allow those intent on doing harm to outgun members of law enforcement, and they have no place on the streets of our neighborhoods.”

The bill’s language would bar the sale and transfer of specific firearms such as AR-15s and Barrett .50-caliber rifles, as well as any semi-automatic with a detachable magazine and two or more cosmetic features such as a folding stock or flash suppressor. While the legislation allows grandfathering of guns and magazines already in circulation, owners could only have them at home or their place of business, and only take them to a shooting range or educational exhibit. Violations of the law would be a felony and result in as much as 10 years in prison.

Lawmakers say the proposal is based on neighboring Maryland’s 2013 Firearm Safety Act, a sweeping and controversial ban passed in the wake of the Sandy Hook school shooting in Newtown, Connecticut. Challenged by gun rights advocates, in 2014 a federal judge ruled that AR-15 style rifles and others “fall outside Second Amendment protection as dangerous and unusual arms.” That decision was rejected on appeal by the U.S. 4th Circuit in 2016, leading to a retrial by a rare en banc panel of the entire court which stood behind the ban in a 10-4 ruling last year. The Supreme Court refused to hear further appeal in the matter, upholding the ban by default.

The ban is not the only anti-gun bill tracking in Delaware. The state Senate earlier this month passed measures to ban bump stocks and strengthen penalties for straw purchases while the state House this week greenlighted a bill raising the age to buy rifles to 21.

Notably, Delaware as a whole has seen few murders in recent years. According to FBI statistics from 2016, the state saw 56 documented homicides, mostly from guns, though none of those were reportedly by rifle or shotgun. Despite its small size, however, Wilmington suffers from a high violent crime rate, with a cluster of teen shootings.