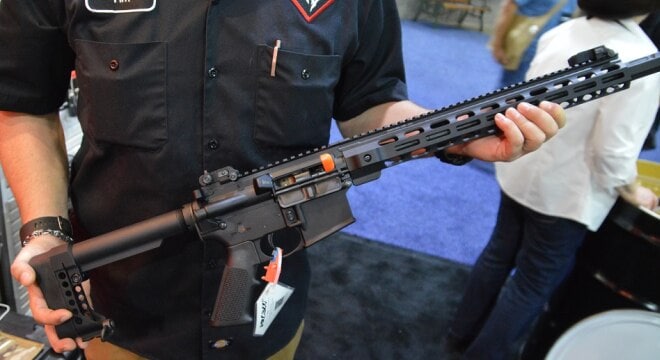 Gun rights attorneys argue laws dating back to 1631 protect the gun rights of those 18-to-20 years of age while some lawmakers argue banning gun sales to that demographic is needed (Photo: Chris Eger/Guns.com)

A group of four bipartisan Congressmen from the Sunshine State has introduced a bill in the U.S. House to raise the minimum age to purchase firearms to 21.

The measure, H.R.5398, was filed last week by Florida Democrats Charlie Crist and Ted Deutch, joined by Republicans Carlos Curbelo and Thomas Rooney. The legislators argue the proposed age-based restriction, which would raise the lower threshold for rifle and shotgun sales through licensed federal firearms dealers from age 18 to 21, is a step in the right direction.

“If you can’t drink a beer until you turn 21, it makes sense that you should have to wait until you’re 21 to buy a gun,” Rooney said in a statement. “This bill may not be the end-all, be-all for commonsense gun legislation, but it is the type of bipartisan compromise on a tough issue that we don’t see enough of in today’s politics.”

While the language of the bill is not available, a release from Curbelo’s office says the measure would allow exceptions for corrections and law enforcement officers, as well as members of the military, and wouldn’t bar someone under the age of 21 from possessing a gun. The bill comes a month after U.S. Sen. Jeff Flake (R-Ariz) and Dianne Feinstein (D-Calf) debuted a similar bipartisan measure in the Senate which Florida Democrat Bill Nelson later signed on to.

The state is now six weeks past a mass shooting committed at Marjory Stoneman Douglas High School in Parkland, Florida that left 17 dead and 15 others injured. The suspect in the shooting, currently awaiting trial, was a 19-year-old. In response to the tragedy, the state legislature rushed through an omnibus school security and gun control package that removed the gun rights from all of the 19-year-olds in the state, as well as those 18 and 20 for good measure. That law, opposed by Second Amendment groups, was swiftly challenged in federal court by the National Rifle Association.

While Rooney, a former professor of Constitutional law at West Point, contends “Federal courts have consistently upheld the Constitutionality of age-based restrictions on the commercial sale of firearms to protect public safety,” not everyone agrees with that assessment. Attorneys David Kopel and Joseph Greenlee argue in a piece published by The Hill that trusting 18-to-20-year-olds with guns predated the Second Amendment itself and “had been included in over one hundred militia acts” before the Constitution was written, some dating as far back as the 17th Century.

“Finally, it is disingenuous to prosecute 18-to-20-year-olds as adults for firearms offenses or other crimes, while simultaneously denying them the right to own firearms because they supposedly are incapable of adult responsibility,” says Kopel and Greenlee.

Rooney’s legislation has been referred to the House Committee on the Judiciary.