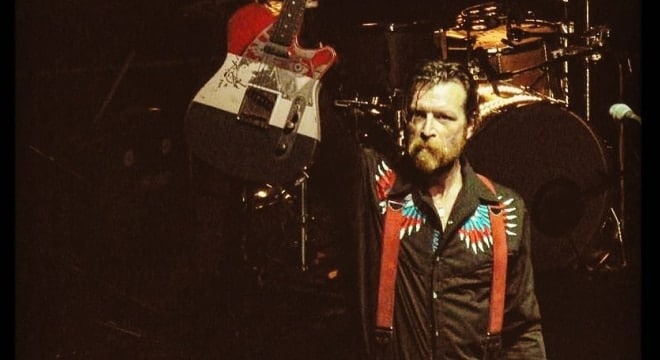 Jesse Hughes, who was on stage when terrorists attacked the Paris venue his band was playing at in 2015, is not a fan of gun control (Photo: Hughes via Instagram)

Jesse Hughes, of the rock band Eagles of Death Metal, was on stage at the Bataclan theatre in Paris when terrorists attacked and he has a dim view of the current crop of anti-gun advocates.

The 2015 attack left 89 dead at the French theatre, including one of the band’s managers and Hughes, who returned with the band the next year to rock with survivors, has been often outspoken in favor of gun rights since then. The singer this week railed against last weekend’s national March for Our Lives event, calling the participants “vile abusers of the dead” and slamming their gun policy demands in turn.

“As the survivor of a mass shooting I can tell you from first-hand experience that all of you protesting and taking days off from school insult the memory of those who were killed and insult me and every other lover of liberty by your every action,” Hughes wrote on Instagram in a post he has since removed.

“The best thing to do to combat chronic abusers and disregarders of the law (like the law against Murder) is to……….pass another Law!…..Genius!…… but before we pass this law we’re going to denigrate the memory and curse ourselves by exploiting the death of 16 of our fellow students for a few Facebook likes and some media attention….and look how well civil rights abuses as it concerns firearms helped to protect me and my friends in Paris!!!!!” said Hughes.

The entertainer’s social media account has since been swamped with often bitterly hostile feedback.

In a 2016 interview with a French news outlet, Hughes was candid with his feelings on restrictive gun laws.

“Did your French gun control stop a single fucking person from dying at the Bataclan?” Hughes asked. “And if anyone can answer yes, I’d like to hear it, because I don’t think so. I think the only thing that stopped it was some of the bravest men that I’ve ever seen in my life charging head-first into the face of death with their firearms.”